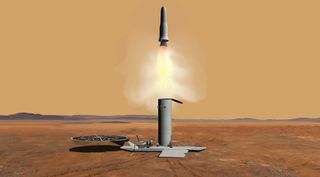 An earlier concept for a Mars ascent vehicle, which would transport samples collected from the Martian surface into orbit. Those samples would be returned to earth by another spacecraft.
(Image: © NASA/JPL-Caltech)

WASHINGTON — NASA is studying a "lean" architecture for Mars sample return that could allow the agency to bring back Martian rocks as soon as the end of the 2020s.

The concept, discussed at an Aug. 28 meeting of a National Academies committee performing a midterm review of the 2011 planetary science decadal survey, would focus on getting samples cached by the upcoming Mars 2020 mission off the planet  and back to Earth as soon as possible.

"This is a much more lean architecture," said Thomas Zurbuchen, NASA associate administrator for science. "It goes straight for what I would consider the jugular issue, which is how to land and take off the planet." [Pieces of Heaven: A Brief History of Sample-Return Missions]

The concept, which he said is just one of many the agency is looking into, would involve the launch of a Mars lander no earlier than 2026, equipped with a sample collection rover and a rocket, known as a Mars ascent vehicle. The spacecraft would land near the Mars 2020 landing site and dispatch its rover to collect the samples cached by the earlier mission, returning them to the lander.

Those samples would be loaded onto the Mars ascent vehicle on the lander, which would then launch them into Mars orbit. A sample collection orbiter, launched separately, would then rendezvous and grab the sample for a return either direct to Earth or to cislunar space.

Zurbuchen didn't give an explicit schedule for when those samples would arrive back at Earth. A "notional" timeline presented in one chart showed the sample collection lander launching at the beginning of "Year 1" with the samples arriving back on Earth in the latter half of "Year 3."

That rapid schedule would require the sample collection lander to deploy its rover, pick up the cached samples, and return them for launch into Mars orbit in just nine months. That largely rules out putting scientific instruments on that collection rover. "I'm sure somebody's going to ask me to add science," he said, "and they better have a really, really, really good argument."

That emphasis on a near-term timeframe and rapid pace of the mission, he said, would eliminate the need to launch another spacecraft to serve as a communications relay. A schedule with a launch in 2026, he said, could use existing spacecraft in Mars orbit, including Mars Reconnaissance Orbiter (MRO), MAVEN and Europe's Trace Gas Orbiter, which are currently being used or have the ability to be used as communications relays for spacecraft on the surface. The sample collection orbiter could also be used for communications, he said.

"If we go relatively quickly, I don't need another orbiter," he said. Should the launch of the sample collection lander be delayed beyond 2026, he said, he would be "less comfortable" with that approach as those existing spacecraft age.

This approach, he added, also provided opportunities for collaboration with both international and commercial partners. That includes, he said, buying communications services from commercial providers. "If you could buy communications by the yard, that's a lot cheaper," he said.

That led some meeting attendees to conclude that NASA was losing interest in a future Mars orbiter, known as Next Mars Orbiter  or NEMO. That spacecraft, proposed for launch as soon as 2022, would handle both the communications and high-resolution imaging roles of MRO, supporting both sample return missions as well as later human missions to the planet.

"If we manage to do something relatively rapidly, the answer is yes," Zurbuchen said when asked if this architecture meant no need for another orbiter mission.

That emphasis on sample return could be worth the expense — for which he did not provide an estimate in his presentation — if the science it produces is "civilization scale" in nature, he said. "It's the kind of science that, once we do it, changes not only what we know but how we think."

He asked the committee, which is reviewing how NASA is implementing the recommendations of the planetary science decadal survey, to deliberate on the scientific importance of Mars sample return. "The question really is how important is sample return, and how important sample return is going forward for the future of the Mars program," he said.