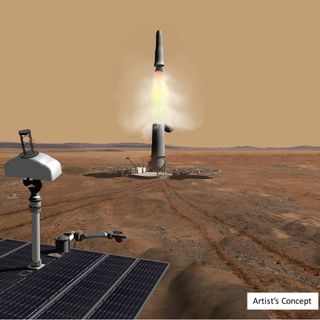 Artist's illustration of a sample-carrying robotic Mars Ascent Vehicle rocketing off the Red Planet under the watchful eye of an accompanying mini-rover.
(Image: © NASA/JPL-Caltech)

SANTA FE, N.M. — With NASA's sample-caching 2020 Mars rover mission just around the corner, the best strategy for hauling Red Planet rock and dirt to Earth is a now a topic of considerable discussion and debate.

Spoiler alert: Rocketing pieces of Mars to our planet isn't an easy task!

To grapple with the scientific, technological, and policy issues that come with such a robotic venture, NASA has created a Returned Sample Science Board (RSSB). A half-day workshop on where this effort now stands took place here July 23, before the 80th annual meeting of The Meteoritical Society, which was held July 24 through July 28. [Pieces of Heaven: A Brief History of Sample-Return Missions]

An objective of the workshop was to familiarize the international sample-analysis community with the Mars 2020 rover mission. That six-wheeled robot is being equipped to collect samples and cache them on Mars for future pickup and delivery back to Earth.

Ripe for the picking

NASA's Mars 2020 rover is scheduled to lift off in July or August 2020 and set down on the Red Planet in February 2021. At the moment, there are three landing site candidates, all of which are deemed good candidates to harbor evidence of past Mars life, if it ever existed. A decision on the final touchdown spot is expected next year.

"Mars 2020 will gather samples for potential return to Earth in the future. It’s time for the sample-analysis community to get serious about defining and prioritizing Mars sample science, and in helping to make the case for the future missions that would get those samples home," said RSSB co-leader David Beaty, chief scientist for the Mars Exploration Directorate at NASA's Jet Propulsion Laboratory (JPL) in Pasadena, California.

Hurling back to Earth pieces of Mars has been deliberated for decades, Beaty said, with the space science community patiently waiting for the time when such a robotic mission was feasible. "Well, it's getting real and the opportunity is there," he told Space.com. "But if we're not careful, it's possible to squander the opportunity."

Caching a set of returnable samples is a top requirement for the 2020 rover, said Ken Farley, project scientist for the mission at the California Institute of Technology in Pasadena.

The intent is to use the Mars machinery, Farley said, to find and characterize ancient habitable Martian environments, identify rocks with the highest chance of preserving signs of ancient Martian life if it were present, and, within those environments, seek the signs of life.

Specifically, the robot is capable of acquiring 37 "scientifically enticing" samples in total. But the prime mission duty is to snare 20 samples over 1.5 Mars years, Farley said. The samples will be encased in tightly sealed tubes and cached for later recovery by a follow-on lander, which is not officially on NASA's books yet. [NASA's Mars Rover 2020 Mission in Pictures (Gallery)]

Joe Parrish, deputy manager of the Mars Program Formulation Office at JPL, detailed several possible sample-return strategies. "We're looking at a variety of mission architectures to do that," he said.

One involves a small "fetch rover" that gathers up and moves the samples to a stationary Mars Ascent Vehicle, or MAV. Other ideas involve a larger solar- or nuclear-powered rover that's mobile and hauls around a MAV on its back for ship-and-shoot purposes.

"The stock price as of today is higher" for the fixed MAV and fetch-rover concept over a mobile MAV, Parrish said, "but these stock prices fluctuate up and down." Engineers are delving into the pros, cons and challenges of all the concepts, he added.

Once propelled off the Red Planet by the MAV, the encapsulated specimens would enter Mars orbit for rendezvous and pickup by a solar electric propulsion orbiter. From there, the grab-and-go courier service plan might involve shipping the samples directly back to Earth for a high-speed desert landing, Parrish said.

The Mars samples could also be taken to the Earth-moon system for linkup with NASA's proposed Deep Space Gateway/Orion spacecraft facility, Parrish said. From there, a human crew could bring the Mars goods home to Earth.

McCubbin said that Mars sample-return is going to present some distinctive challenges. For instance, Mars — along with Jupiter's moon Europa and the Saturn satellite Enceladus — is designated as a Planetary Protection Class V restricted Earth-return body. This term, he said, is reserved for cosmic objects deemed to be of significant interest to the process of chemical evolution and/or the origin of life.

In regard to Mars rock and soil, there is a need to conduct, under strict containment and using approved techniques, timely analyses of the unsterilized sample collected and brought to Earth.

"If any sign of a non-terrestrial replicating entity is found, the returned sample must remain contained unless treated by an effective sterilizing procedure," McCubbin said.

Before any Mars specimens are released to the general scientific community for study, McCubbin said a "Sample Pre-Release Report" must be prepared to certify that the sample will not harm Earth’s biosphere. This report verifies that biohazard and life-detection protocols have been carried out and that samples are safe for release, he said.

There is a body of research and techniques now used, in addition to know-how using high-level biosafety facilities, that can help guide the proper handling of Mars samples, McCubbin said.

"Mars sample-return will present some unique challenges, but, honestly, I think the world is ready for this," he said.

As the workshop wrapped up, RSSB co-leader Harry McSween, of the Department of Earth & Planetary Sciences at the University of Tennessee in Knoxville, said: "I hope everyone leaves this workshop with the belief that this is real now."

"We are developing the technological ability to collect these samples and bring them back home," McSween said. "What is missing is the will. And the will is going to have to come from lobbying by the science establishment, particularly the sample community. I hope you'll take that message back."

Leonard David is author of "Mars: Our Future on the Red Planet," published by National Geographic. The book is a companion to the National Geographic Channel series "Mars." A longtime writer for Space.com, David has been reporting on the space industry for more than five decades. Follow us @Spacedotcom, Facebook Google+. Published on Space.com.