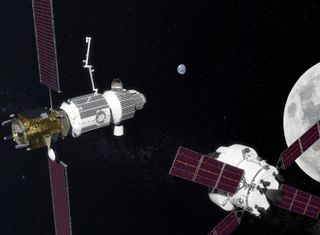 An artist's concept of NASA's planned "deep-space gateway" in orbit around the moon. This astronaut-tended outpost could help get material from Mars and other celestial bodies back to Earth, agency officials say.
(Image: © NASA)

The outpost that NASA plans to build in lunar orbit could serve as a stopover point for extraterrestrial samples headed to Earth for analysis, agency officials said.

This crew-tended "deep-space gateway," which NASA aims to have up and running in the 2020s, will enable a variety of missions in Earth-moon space and serve as a stepping-stone to Mars. But it also may help get dirt and rocks collected on the Red Planet and other celestial bodies down to Earth, acting NASA chief Robert Lightfoot told Congress Thursday (June 8).

"That's what we think," Lightfoot said during a hearing with the Commerce, Justice and Science Subcommittee of the House of Representatives' Committee on Appropriations. [Red Planet or Bust: 5 Crewed Mars Mission Ideas]

"You basically have a system that gets you from [the] moon to Earth, and then you have one that can go anywhere, and it becomes the hub that you go back to," Lightfoot added.

Sample-return projects offer a chance to study extraterrestrial material in greater detail than "standard" planetary missions allow. Robotic rovers and landers can accommodate only a small number of onboard instruments, and they must be controlled from afar, meaning there's a time lag.

NASA astronauts famously brought back hundreds of pounds of moon rocks and soil during the Apollo era, and study of this material in labs around the world continues to this day.

If all goes according to plan, the probe will reach the 1,640-foot-wide (500 meters) Bennu in 2018 and will return a sample of the space rock to Earth in 2023. This material will travel straight home in a specially designed capsule, landing with the aid of parachutes in the Utah desert.

And NASA's 2020 Mars rover — which will launch in 2020, as its name suggests — will cache Red Planet samples for future delivery to Earth. (The six-wheeled robot will also hunt for signs of Mars life, test gear that can generate oxygen from atmospheric carbon dioxide and perform a number of other duties.)

Currently, there is no concrete plan for getting this material home, so a layover at the deep-space gateway could be a possibility for Mars 2020 samples.

The gateway will be much smaller than the $100 billion International Space Station; the maneuverable outpost's core will consist of a crew habitat, a propulsion module and an airlock, Lightfoot said. The deep-space gateway will be occupied intermittently, rather than continuously as the space station is, he added.

"Imagine it just as a node that's out there around the moon. You can go there; you can dock; you can do tele-robotic operations at the moon," Lightfoot said during Thursday's hearing.

The gateway can also connect with "the vehicle you're going to go to Mars in, and you can use that as the node where you leave from there to go out," he added.

NASA aims to send astronauts to Mars sometime in the 2030s. To make that happen, the agency is developing a capsule called Orion and a huge rocket called the Space Launch System (SLS).

Orion has flown once, on an uncrewed trip to Earth orbit in December 2014. SLS is currently scheduled to launch for the first time in 2019, on a flight called Exploration Mission 1 (EM-1) that will send an uncrewed Orion on a three-week journey around the moon.

The first crewed SLS-Orion flight, Exploration Mission 2 (EM-2), is slated for no later than 2023. If all goes according to plan, EM-2 will loft the first piece of the deep-space gateway, Lightfoot said.

"When we take the first crew, we'd like to take the power propulsion module in the trunk when we go," he said.