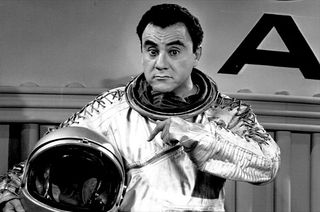 With those words, radioed to Alan Shepard as he lifted off to become the first American astronaut to fly into space on May 5, 1961, Bill Dana's role in NASA history was sealed.

Dana, a comedian whose performance as "José Jiménez" was bestowed the title of being the eighth of the Mercury 7 astronauts, died on Thursday (June 15). He was 92. [Photos from Alan Shepard's Freedom 7 Spaceflight]

"He'll be missed not only by the astronaut family, but many more around the world," said Tammy Sudler, president and CEO of the Astronaut Scholarship Foundation. "Bill Dana was lovingly known as our honorary Mercury 8 astronaut."

First created in 1959 for "The Steve Allen Show" and later appearing on "The Ed Sullivan Show," José Jiménez held several positions, including an elevator operator, a bobsled racer, a Navy submariner and a lion tamer, but it was as the shiny-spacesuited, reluctant astronaut that the Bolivian character became famous (Dana was of Hungarian-Jewish ancestry in reality).

"What do you consider the most important thing in rocket travel?" asked Ed Sullivan, playing the straight man during one of Dana's better-known skits.

"To me the most important thing in the rocket travel is the blast-off," said Dana.

"I always take a blast before I take off. Otherwise, I would not go near that thing," Dana quipped as Jiménez.

Dana's José Jiménez routine was later released on record albums, rising to the Top 20 on the Billboard charts, which drew the attention of the real-life Mercury astronauts.

"The astronauts, especially Shepard, absolutely loved the record, and listened to it in the office after intense training sessions," author Neal Thompson described in "Light This Candle" (Crown, 2004), his biography of the first astronaut. "Shepard even tape recorded the album and during lulls between training exercises or during test launches at the Cape would play the tapes at full volume near the Mission Control loudspeakers."

The astronaut and comedian first met at a Cocoa Beach night club, where Shepard — from out in the audience and without the prior knowledge of Dana — took on the role of the straight man, setting up Jiménez's replies. Soon, fellow astronauts Wally Schirra and Deke Slayton joined in.

"The club was roaring as the three astronauts took turns," wrote Thompson. After the show, Dana hurried to a phone to call his producer in New York.

"'They know us. They know every word. And they love us," exclaimed Dana, as described by Thompson.

Shepard and the other astronauts' fondness for Dana and his character led to José Jiménez becoming the unofficial mascot of the Mercury program. In addition to inspiring the 1961 launch call between Slayton (in the blockhouse) and Shepard (on top of a Redstone rocket), Dana performed at President John F. Kennedy's inaugural ball with Shepard in attendance.

The comedian also inspired a "gotcha" — a practical joke — that Shepard arranged in secret for John Glenn to discover once aboard his Friendship 7 Mercury spacecraft. Opening up a pouch while in orbit, Glenn was surprised by a small stuffed mouse floating free, a reference to the "leetle mice" Jiménez would cite as fellow test subjects in his routine.

Born William Szathmary in Quincy, Massachusetts on Oct. 5, 1924, Dana served as a gunner and mortarman in the U.S. Army during World War II. Dana began his career in comedy as a page and a writer for other comedians' stand-up routines.

Later, after gaining fame in his own right, Dana became a screenwriter for television and movies, writing the Emmy-Award-winning "All in the Family" episode, "Sammy Davis Visits Archie Bunker" (1972), penning jokes for the "Donny and Marie" show (1977-1978), and co-writing the script for the "Get Smart" film "The Nude Bomb" (1980). Dana also had a recurring role as Angelo, brother to Sophia Petrillo (Estelle Getty) on the NBC sitcom, "The Golden Girls."

Dana also showed up as José Jiménez in a number of TV cameos, including as part of a 1966 episode of "Batman," appearing alongside the late Adam West and Burt Ward.

The character eventually fell out of favor due to pressure from Hispanic groups and Dana retired the role in 1970, but he would later reunite with the astronauts through their Mercury 7 (later, Astronaut Scholarship) Foundation, and even reprised the skit at NASA's Kennedy Space Center in Florida for a 2002 gala celebrating the 40th anniversary of the first U.S. orbital spaceflights.

A voting member of the nominations committee of the National Aviation Hall of Fame, Dana was acknowledged in the Smithsonian's National Air and Space Museum in Washington, D.C. and in the U.S. Astronaut Hall of Fame in Florida. He was honored with the first Impact award by the National Hispanic Media Coalition and was presented with a lifetime achievement award by the Pacific Broadcast Pioneers of Radio and Television in 2006.

In 2005, Dana co-founded the American Comedy Archives at Emerson College, his alma mater, in Boston.