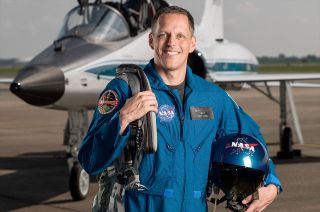 NASA astronaut candidate Bob Hines poses in front of a T-38 jet in a blue flight suit, just like the one he has worn as a NASA research pilot at Johnson Space Center in Houston since 2012.
(Image: © NASA)

HOUSTON — For most of Bob Hines' classmates, the act of putting on a blue flight suit was a new experience.

As NASA revealed on June 7, Hines and 11 other men and women were chosen as the space agency's 22nd group of astronaut candidates since April 1959. A few of the recruits expressed how donning the "NASA blue" was the first time that their astronaut selection began to feel real.

But that wasn't the case for Hines. [Astronauts Record Awesome Welcome Video for NASA's 2017 Recruits]

"I think 'the moment' for a lot of people is putting on that blue flight suit. That was different for me because I've been wearing it for a long time," Hines said in an interview.

Unlike the other astronaut candidates in his group, Hines was already working for NASA. A test pilot for 18 years in the U.S. Air Force and U.S. Air Force Reserve, Hines, 42, became a research pilot at Johnson Space Center in 2012.

"When I came to NASA, it was an opportunity to be a small cog in this thing that is manned spaceflight, because that was the only way I thought I could be involved," he stated. "Knowing what the aircraft ops division does and how they are involved with the astronaut office, that is what drew me here."

Hines is now joining the ranks of a small but storied group of NASA research pilots who went from piloting aircraft to flying on spacecraft for the civilian agency.

When Hines begins two years of basic astronaut training in August, his arrival will be just a few weeks shy of 55 years since a NASA research pilot became a NASA astronaut for the first time.

Neil Armstrong, who would famously go on to become to the first person to walk on the moon, began his career with NASA as a research pilot at the High-Speed Flight Station (today, the Armstrong Flight Research Center, renamed for the late astronaut in 2014) at Edwards Air Force Base in California. He test flew the X-15 rocket plane, among other NASA aircraft, and helped in the development of the Lunar Landing Research Vehicle (LLRV) before being named a member of the second group of astronauts in 1962.

Since then, just under a dozen more NASA research pilots have joined the U.S. astronaut corps.

"I do not want to say there is a long history, but there is a certain precedent for people who were doing the research pilot job to have been picked up," said Hines as part of his class' announcement by NASA. "It has been 25 years, or somewhere around there, since an individual was selected out of the aircraft operations division."

"Greg Johnson is still involved there [at Ellington Airport, near Johnson Space Center in Houston], he's the division chief for aircraft ops," Hines said. "He followed that same path, as well. He was flying up there, got selected, flew the last of the servicing missions to Hubble and now he's back there as the division chief."

"And Ken Cockrell was still there when I got there. Talking to both about their path kind of had me going, 'Maybe this is not over.' I thought when I left active duty Air Force that my chance was over. They certainly rekindled the flame a little bit," Hines told collectSPACE.

Other astronauts, like Vance Brand, Gordon Fullerton and Steve Nagel, went the other direction, becoming NASA research pilots after their launches to space, and still others flew first as instructor pilots or served in other roles in the aircraft operations division before becoming astronauts, including Marsha Ivins, Steven Swanson, Nicole Stott and Shane Kimbrough. [What It's Like to Become an Astronaut: 10 Surprising Facts]

Earlier this year, he flew a five-week mission to Greenland, where a radar instrument mounted on the G-III measured the thickness of the glaciers surrounding the island.

And as a reservist in the Air Force, Hines also reports to Eglin Air Force Base in Florida, where he flies as an F-15 test pilot.

That will change as he becomes an astronaut.

"I think all of that will be divorced, at least for a while," said Hines. "Astronaut training on aircraft is called 'spaceflight readiness training' and most of that is in the T-38s. We just started recently branching out and so we do have a WB-57 aspect to that. Most of that is in the backseat, but it is an opportunity for astronauts who have not flown in space yet to get into a pressure suit and have to do some technical tasks in terms of operating instruments."

"In the meantime, I am in this weird position where I am an instructor pilot and qualified in the T-38," he continued. "So I may do some academic instruction on the T-38 when the class first gets there. But after that, I am a student just like the rest. Other than the T-38 stuff, I am going to be exactly like the rest of the class."

Like his fellow astronaut candidates ("ascans"), Hines' prior experience will be an asset to his new role as he prepares to fly in space. Earlier research pilots, especially during the space shuttle era, were able to directly apply their piloting skills to flying in space.

"The analog was very easy with the space shuttle, it being a winged spacecraft," said Hines. "I think when you look at a lot of the backgrounds of us [the 2017 ascans], there is some operational flavor to each of us, whether it is living in Antarctica or on a submarine and all that kind of stuff. It is how you make time critical decisions in what's a potentially life-threatening scenario. So I think that is one piece of it."

"And then piloting, and specifically test piloting, I think will play into it as well," he continued. "If you look at the Orion spacecraft and the game plan for it moving forward, every flight is going to be a test program — whether it is testing specifically Orion or a new habitat technology or that kind of stuff. So, I think having people with some kind of flight test expertise is going to be valuable moving forward."

Just around the time Hines and his class graduate from basic training in two years, the nation, if not also the world, will be marking 50 years since Apollo 11 and the first moon landing. The 2017 ascans will be the first astronauts of the next 50 years who may return to the moon or go beyond.

"I've always looked up to the Apollo program," said Hines. "I saw STS-1 [the first space shuttle mission], but learning about the Apollo program has really been one of my big inspirations. The more I learned about what Apollo, Gemini and Mercury did, the more excited I got about trying to get involved in it, or at least learn as much as I could about it."

Hines had the chance to meet and briefly speak with Neil Armstrong while attending the Air Force Test Pilot School at Edwards Air Force Base. Hines and his fellow students went to a Society of Experimental Test Pilots symposium in 2008 where Armstrong made a point of meeting with them.

"He knew that we were coming and he actually presented us each with a bound copy of the LLRV test report," Hines recalled. "He was certainly an inspiration. He was the icon — whether he wanted to be or not — that exemplifies what NASA is."

Five years later, after Armstrong died in 2012, Hines had chance to pay tribute to the man whose footsteps he would later follow. As a NASA research pilot, Hines and his fellow T-38 pilots took to the air over Johnson Space Center.

"I got to lead the 'Missing Man' formation for his memorial service. To be able to honor him was really special," Hines said.