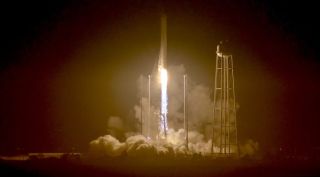 The Antares returned to flight last October with the launch of a Cygnus cargo spacecraft. The next Antares launch, also of a Cygnus, is planned for later this summer.
(Image: © Bill Ingalls/NASA)

WASHINGTON — Orbital ATK plans to resume using its Antares rocket for launches of the Cygnus cargo spacecraft later this summer, as the company continues to seek additional government and commercial customers for the launch vehicle.

At a June 12 briefing at NASA's Wallops Flight Facility in Virginia, company officials said they expected the next Cygnus mission, OA-8, to launch on an Antares rocket from its facilities there in September, but that the date could be moved up by a month or more depending on NASA's needs.

"The launch date on the manifest now is September the 12th," said Frank Culbertson, president of Orbital ATK's Space Systems Group. That is based on current NASA plans to launch a SpaceX Dragon cargo mission in August. Culbertson said Orbital ATK would be ready to launch sooner depending on NASA's requirements. "We're prepared to launch as early as late July, really, if need be."

That launch will be the second Cygnus mission to use an upgraded version of the Antares rocket, known as the Antares 230. That version uses RD-181 engines from Russian company NPO Energomash in the rocket's first stage, replacing the AJ26 engines from Aerojet Rocketdyne — refurbished versions of Soviet-era NK-33 engines — that had been used on Antares launches through an October 2014 launch failure blamed on that engine.

The Antares 230 first launched in October 2016 on a Cygnus mission designated OA-5. "We've done a detailed data review of all the data from that mission, and it was a very clean mission," said Kurt Eberly, Orbital ATK Antares vice president. Both the first and second stage generated more thrust than originally expected, which he said will allow greater payload performance on future missions.

The launch pad at the Mid-Atlantic Regional Spaceport at Wallops, repaired after the 2014 launch failure, is also ready to support a launch later this summer. "After the last mission, we came through that very well," said Dale Nash, executive director of Virginia Space, the state agency that built the pad for Orbital ATK. The higher performance of the upgraded Antares, he said, allowed it to depart the pad faster, minimizing the wear and tear there. "It came through in remarkably good shape."

Despite the successful return to flight of Antares last October, Orbital ATK announced just a few weeks later that it would launch the next Cygnus spacecraft, OA-7, on a United Launch Alliance Atlas 5, the same rocket used for two earlier Cygnus launches after the 2014 Antares launch failure.

Company officials said then a desire to get additional cargo on the Cygnus by using the more powerful Atlas 5 led them to purchase another launch, as well as providing NASA with the "highest assurance" they would be able to launch in the spring. That mission launched April 18 and the Cygnus reentered June 11, a week after departing the station.

Culbertson said that Orbital ATK plans to use only the Antares for the foreseeable future. That includes the four remaining missions on its original Commercial Resupply Services (CRS) contract with NASA, including the OA-8 mission, as well as the six missions on its CRS-2 follow-on contract awarded last year. NASA has given an authorization to proceed with the first of those six, which he said is expected to launch some time in 2019.

"Right now, all the missions that we have on the schedule are intended to go on the Antares and to go out of Wallops Flight Facility," he said.

The additional performance available on the Antares 230 will allow future Cygnus missions to carry more cargo. "We'll be flying 3,350 kilograms on OA-8," said Eberly. "We're going to ramp that up by OA-11 to 3,500 [kilograms], and then we'll go even above that for CRS-2 missions."

Those 10 Cygnus missions between later this summer and some time in the 2020s are the only spacecraft currently contracted to launch on Antares, a rocket Orbital Sciences Corp. originally developed as a replacement for the aging Delta 2 for medium-sized payloads.

"We are actively pursuing other missions outside of the CRS contract," Eberly said, declining to go into details because of "competitive nature of some of the bids." He also said that Orbital ATK had "on-ramped" the Antares onto the NASA Launch Services contract vehicle, making it eligible for future NASA missions other than CRS flights.

However, he said there are no plans to seek U.S. Air Force certification of the Antares for military missions. "Right now we're pursuing civil government and commercial," he said.