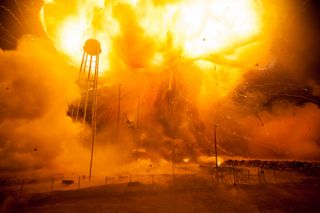 According to SpaceNews, NASA has posted new images to a 39-photo gallery of the ill-fated Antares launch on its Flickr page — just a week or so after the agency released the results of its investigation into the failure. (NASA and Orbital ATK both determined that the explosion was caused by a problem with the turbopump in one of the Antares' two first-stage AJ-26 engines.)

You can see all of the images at NASA HQ's Flickr page. While NASA released some photos just after the Antares rocket explosion in 2014, the newly released images - which like the earlier ones were taken by NASA photographer Joel Kowsky - show dramatic views of the explosion, including the intense fireball it spawned at the Antares launchpad.

The next Cygnus mission is scheduled to launch on Dec. 3 atop a United Launch Alliance Atlas V rocket, which Virginia-based Orbital will use until a retooled version of Antares that swaps out the AJ-26 engines for Russian-made RD-181s is ready to go. That should happen in spring 2016, Orbital representatives have said.

The AJ-26, incidentally, also has Russian heritage; it's a refurbished variant of the NK-33 engine, which the Soviet Union built for its N1 moon rocket during the space race.

Orbital ATK isn't the only American spaceflight company with a NASA cargo contract. California-based SpaceX is getting $1.6 billion to fly at least 12 missions to the orbiting lab using its Falcon 9 rocket and robotic Dragon capsule.

SpaceX aced the first six of these flights, but number seven ended less than three minutes after liftoff on June 28 of this year when the Falcon 9 broke apart in the skies above Florida's Cape Canaveral Air Force Station. That mishap was caused by a faulty steel strut in the Falcon 9's upper stage, SpaceX CEO Elon Musk has said.

SpaceX plans to launch its next cargo mission to the International Space Station in early January.