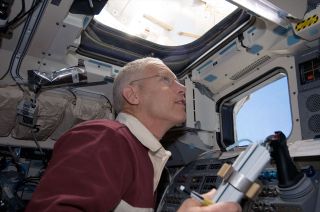 NASA astronaut Patrick Forrester, seen on the flight deck of space shuttle Discovery in 2009, has been appointed the new Chief of the Astronaut Office at Johnson Space Center in Houston.
(Image: © NASA)

HOUSTON — NASA has appointed a new leader for its astronaut corps, just days before naming its latest class of trainees.

Patrick Forrester, a retired U.S. Army colonel who flew on board three space shuttle flights to the International Space Station, has become the 16th Chief of the Astronaut Office at Johnson Space Center in Houston. Forrester succeeds Christopher Cassidy, who has returned to the active corps to await his third spaceflight assignment.

"I have known Pat for more than 20 years. He will no doubt be an outstanding chief," said Brian Kelly, NASA's director of flight operations, who chose Forrester for the promotion. [NASA's Best Photos of Earth from Space of 2016 (Gallery)]

"Pat is a well-respected and proven leader," Kelly said in a statement on Friday (June 2), "who will capably guide our astronauts as they reach beyond low-Earth orbit."

The position of chief astronaut, which was first created and held by original Mercury 7 astronaut Deke Slayton in 1962, oversees the corps' activities, including managing training programs, appointing technical assignments and choosing the crews for upcoming missions.

As a part his new role, Forrester will oversee the incoming 2017 class of astronaut candidates — NASA's 22nd group of trainees since 1959 — who were chosen out of a record pool of more than 18,000 applicants under Cassidy's lead.

"One of my roles as a chief astronaut is to select new guys and we just completed the process," said Cassidy during a public talk at the John F. Kennedy Presidential Library and Museum in Boston on May 28. "On Thursday [May 25], we made the phone calls to the 12 individuals we just selected to become astronauts."

Vice President Mike Pence will join Kelly and other NASA leaders at Johnson Space Center on Wednesday (June 7) to welcome the new astronauts to Houston.

Cassidy, who became the 500th person to fly in space on a shuttle mission in 2009 and then launched on a Russian Soyuz to spend 166 days aboard the International Space Station in 2013, was selected as an astronaut in 2004. A Navy SEAL, he was named chief of the Astronaut Office in July 2015, replacing astronaut Robert Behnken.

"Chris is an American hero," stated Kelly. "He has been an exemplary leader of NASA's astronaut corps and has been instrumental in the integration of our entire flight operations as well as the selection of our newest astronaut class. His practical approach in tackling the many challenges that our astronauts encounter while living and working in space has been crucial to the continued success of our spaceflight missions."

In addition to the 12 incoming astronaut candidates, who will begin two years of basic training in August, Forrester will lead the current 44 active astronauts in the office. The corps will continue to staff the International Space Station, flying on Russian Soyuz and U.S. commercial vehicles, the latter entering service in the next two years.

NASA is also planning to send crews on missions beyond the Earth, to the moon and Mars using the Space Launch System heavy-lift rocket and Orion exploration spacecraft.

See a list of all 16 chiefs of NASA's Astronaut Office at collectSPACE.