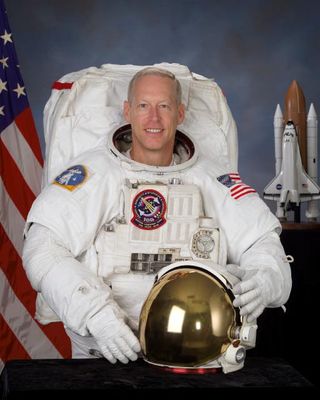 In 1984, he was assigned to the 25th InfantryDivision (Light), Schofield Barracks, Hawaii, where he served as a platoonleader, aviation company operations officer, and an assault helicopterbattalion operations officer. After completing a Master of Science degree atthe University of Virginia in 1989, he was assigned as a flight test engineerand as the research and development coordinator with the Army Aviation EngineeringFlight Activity at Edwards Air Force Base, California.

In June 1992, he graduated from the U.S. Naval TestPilot School and was designated an experimental test pilot. In 1992, he wasassigned as an engineering test pilot at the U.S. Army Aviation Technical TestCenter, Fort Rucker, Alabama. Other military schools include the ArmyParachutist Course, U.S. Army Ranger School, the Combined Arms Services Staff School, and the Command and General Staff College.

A Master Army Aviator, he has logged over 4000 hoursin over 50 different aircraft.

Forrester retired from the Army in October 2005.

His technical assignments within the Astronaut Office OperationsDevelopment Branch have included: flight software testing with the Shuttle Avionics IntegrationLaboratory (SAIL); astronaut office representative for Landing/Rollout issues,Multi-function Electronic Display System ( MEDS) upgrade of the Orbiter fleet,and the Portable In-flight Landing Operations Trainer (PILOT). He has alsoserved as the crew representative for robotics development for the International SpaceStation.

Forrester was selected as an astronaut candidate byNASA in May 1996. Having completed two years of training and evaluation, he isqualified for flight assignment as a mission specialist. Initially, Forresterwas assigned to duties at the Kennedy Space Center as a member of the astronautsupport team, responsible for Shuttle prelaunch vehicle checkout, crew ingressand strap-in, and crew egress after landing. He next served as the technicalassistant to the Director, Flight Crew Operations.

Following that, Forrester served as the Shuttletraining and on-board crew procedures representative. He has also served as aCAPCOM for both ISS and shuttle missions. Forrester flew on STS-105(2001). He has logged over 285 hours in space, including two spacewalkstotaling 11 hours and 45 minutes of EVA time. Currently, he is assigned to the crewof STS-117.

While at the orbital outpost, the STS-105 crewdelivered the Expedition-3 crew, attached the Leonardo Multi-Purpose Logistics Module(MPLM), and transferred over 2.7 metric tons of supplies and equipment to thestation.

During the mission, Pat Forrester and Dan Barryperformed twospacewalks totaling 11 hours and 45 minutes of EVA time. Forrester servedas the prime robotics operator to install the MPLM. STS-105 also brought homethe Expedition-2crew. The STS-105 mission was accomplished in 186 orbits of the Earth,traveling over 4.9 million miles in 285 hours and 13 minutes.