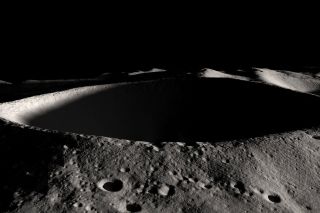 A view of Shackleton crater at the moon's south pole.
(Image: © NASA)

The first-ever private mining operation on the moon is scheduled to kick off in 2020, when a landing craft sent by Florida-based Moon Express will ferry a single scoop of lunar dirt and rocks back to Earth.

Unlike the three governments that have led lunar missions — the United States, the Soviet Union, and China — the owners of this private firm have something history-making in mind for that little ball of extraterrestrial soil: They plan to sell it.

"It will instantly become the most valuable and scarcest material on Earth," says Bob Richards, the CEO of Moon Express. "We'll make some of it available to scientific research. But we also plan to commoditize it ourselves."

Moon Express is gearing up to become the first company to ever transport a commercial asset from space back to Earth. But it's not alone.

Several ambitious startups are busily developing plans to launch mining operations on both the moon and asteroids, with initial proof-of-concept missions set to kick off over the next few years and more robust operations within a decade. China is a key player, too, along with a tiny, unlikely European upstart: the Grand Duchy of Luxembourg.

Those seeking to conquer celestial commodity markets are beckoned by the glittering wealth that could await them in space.

"We believe that the first trillionaires will be made from space resources," says Richards.

Exactly which minerals will drive those fortunes remains to be seen.

The moon holds significant amounts of a special type of a futuristic fuel source called helium-3 — enough, some say, to meet all of Earth's power demand for thousands of years providing scientists can master the fusion power technology to utilize it.

A fortune could be made by anyone able to capture and exploit one of the mountain-sized asteroids made of platinum or other precious metals thought to be orbiting the sun, or deposits of rare earth elements on the moon.

Others point to the potential for zero-gravity construction of super-massive colonizing spacecraft and mammoth floating structures using raw materials sourced from asteroids.

Most, however, are focused on a resource that's commonplace on Earth: water.

Water, space entrepreneurs say, will be the key space commodity for an economy expanding into the solar system — both because it can sustain life as drinking water and breathable air, and because it can be broken down into hydrogen and oxygen to make rocket fuel.

Sourcing water from space could, for example, turn the moon into a depot for more ambitious missions.

"Water is like the oil of the solar system," said Richards. "The moon could become a gas station in the sky."

RELATED: NASA to Make Water on the Moon and Oxygen on Mars

In the near term, Moon Express is focused on providing relatively low-cost transport to the surface of the moon for commercial, private, academic, and government customers.

One client that's already signed up is the moon-burial company Celestis, which offers to send cremated human remains to the surface of the moon for a starting price of $12,500.

In 2016 Moon Express became the first private company in history to receive permission from the US Federal Aviation Administration to travel beyond Earth's orbit and land a craft on the moon.

The company is planning three lunar missions by the time it brings back the small scoop of lunar soil, between the size of a baseball and basketball, in 2020.

Selling part of that scoop to private interests — for example, as moon gems for jewelry for the ultra-rich — will set an important precedent. The international Outer Space Treaty of 1967 says no country can claim sovereignty over extraterrestrial territory. But in 2015 President Barack Obama signed a law granting private citizens the rights to resources recovered from space.

The company's first mission, slated for this year, will be in part an attempt to win the Google Lunar XPrize. The competition offers $20 million to the first private company able to land a rover on the moon's surface, travel 500 meters, and then broadcast hi-definition images back to Earth.

Another company fielding a team for the XPrize, which also plans to eventually tap moon water, is Japan's ispace Inc.

In December, ispace signed a memorandum of understanding with Japan's national space agency, JAXA, for the "mining, transport, and use of resources on the moon," according to a company statement.

During an initial phase of operations, from 2018 through 2023, ispace will go prospecting on the moonscape, sending exploratory robots into lunar craters and caves to check for water. Production is planned to begin in 2024.

As an energy source, helium-3 is as alluring as it is elusive: a non-radioactive agent that wouldn't produce dangerous waste. The isotope is released by the sun and carried through the cosmos on solar winds that are blocked by Earth's atmosphere, but collect on the surface of the moon.

As a result, the moon is "so rich" in helium-3, it could "solve human beings' energy demand for around 10,000 years at least," a top Chinese scientific advisor to the country's moon exploration program, Professor Ouyang Ziyuan, told the BBC.

One of the top proponents of lunar helium-3 is Harrison Schmitt, a geologist who walked on the moon during NASA's Apollo 17 mission and wrote a 2006 book advocating lunar helium-3 mining called Return to the Moon.

Others, however, are deeply skeptical — even if the necessary fusion technology, which has long eluded researchers, is mastered.

"I do not see this as being an economic solution to Earth's energy needs," Ian Crawford of the Department of Earth and Planetary Sciences at Birkbeck College, University of London, said in an email. "The problem is that the abundance is very low, of the order 10 parts per billion by mass in even the most abundant regions."

Another potentially attractive lunar resource is the platinum group of metals, including iridium, palladium and platinum, which have special qualities that make them highly useful in electronic devices. Such elements, rare on earth, are thought to be bountiful on the moon.

Richards of Moon Express said it's too soon to specify the most valuable resource on the moon.

"It would be speculative and predictive to say which specific element is going to be the game-changer," he said. "Pick your favorite spice."

For now, he says, the key target is water — which, to be sure, can be found on frozen asteroids circling the sun as well.

Two US companies, Planetary Resources and Deep Space Industries, are leading the charge into asteroid mining, largely with the aim of providing resources that other types of space missions will need.

Rick Tumlinson, chairman of Deep Space Industries, said his company plans to land its first prospector on an asteroid by 2020.

The company will use tiny scouts to explore and study prospective targets. When a prime asteroid has been located, a larger robot will land on it, bite out a chunk, and then use solar power to evaporate and capture water from the sample.

"Water, we believe, is relatively easy to harvest from asteroid materials," said Tumlinson.

If all goes according to plan, "by the middle-20s, we'd be producing serious quantities of resources," he said.

"You can concentrate that solar energy and heat up the surface of the asteroid and literally bake off the water in the same way you'd bake a clay pot," says CEO Chris Lewicki.

Both Lewicki and Tumlinson also point to the potential for supplying building materials in space, which could allow for the construction of super-massive floating structures that would be ungainly to launch from Earth.

In space, "you can build these huge structures we see in movies and science fiction," said Lewicki. "The resource that will allow us to do that is the metal that's on asteroids. We can use technology like 3D printing. We can print up a structure in space that never has to hold itself up on Earth, never has to take a violent rocket ride."

As billionaires Elon Musk and Jeff Bezos explore ideas for colonizing space and Mars, someone, advocates of space mining say, will need to provide the raw materials, water and fuel the colonizers will need.

And while space mining might sound like science fiction, serious backers with deep pockets are taking notice.

A total of $1.8 billion was invested in space ventures in 2015 — more than in the prior 15 years combined, according to the Tauri Group consultancy. More than 50 venture capital firms invested in space deals in 2015, the most of any year, the group found.

The tiny European nation of Luxembourg has invested 25 million euros in Planetary Resources, and collaborated on the development of Prospector-X, the first spacecraft from Deep Space Industries.

The moon, said Richards, is like Earth's 8th continent, and it's largely unexplored.

"We're like early pioneers," he said, "looking at a whole new world."