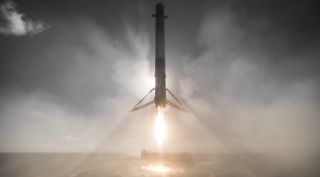 The first stage of a SpaceX Falcon 9 that launched 10 Iridium Next satellites in January performs a landing on a spaceport drone ship.
(Image: © SpaceX)

WASHINGTON — A communications satellite built for a Bulgarian operator will be the second payload to launch on a previously-flown Falcon 9, that operator announced May 5.

In a statement, BulgariaSat said its BulgariaSat-1 spacecraft is scheduled to launch in mid-June on a Falcon 9 from Cape Canaveral, Florida. The first stage of that Falcon 9 will be the same one that launched 10 Iridium Next satellites from Vandenberg Air Force Base in California in January.

Maxim Zayakov, chief executive of BulgariaSat, said the use of a reused first stage lowers the launch price and "makes it possible for smaller countries and companies to launch their own satellites." [Watch SpaceX's Launch (& Land) a Reused Falcon 9]

The company did not disclose the price it is paying for the launch, including what discount it is receiving for using a "flight-proven" first stage. The list price of a Falcon 9 is $62 million for a 2018 launch, according to SpaceX's web site.

The launch will be the second time SpaceX has used a previously-flown first stage on a mission. On March 30, a Falcon 9 launched the SES-10 satellite for global satellite operator SES, using a Falcon 9 first stage that first flew on a NASA cargo resupply mission in April 2016.

SpaceX previously indicated it plans to fly several missions with reused first stages this year, in part to address the backlog of launches the company has accumulated. "We're planning to launch as many as six reused boosters this year," Tim Hughes, senior vice president of SpaceX, said in a May 1 symposium about ultra low-cost access to space here.

BulgariaSat announced last month that the satellite has completed all its tests by its manufacturer, Space Systems Loral, in California and was being readied for transport to Cape Canaveral to begin launch preparations. Those launch preparations are scheduled to start about a month before launch.

The satellite, with an estimated mass of 4,000 kilograms, carries a total of 32 Ku-band transponders to provide fixed and broadcast satellite services and has a planned 15-year lifetime. BulgariaSat said in its statement that 46 percent of the satellite's capacity will be used by Bulsatcom, a Bulgarian telecommunications provider, in Bulgaria and Serbia.

The satellite is a major undertaking for BulgariaSat, which has been working on the project for nearly 12 years. "Elon Musk and his SpaceX team have convinced me that people like them bring us closer to a new quality of life through providing access to cutting-edge technology," Zayakov said in a statement. "This is a chance for Bulgaria to join the efforts to develop these new aspects of [the] space industry."