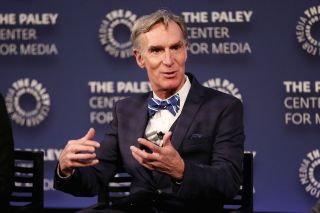 NEW YORK — Science superhero Bill Nye plans to save the world by cultivating a superpower that exists in everyone: critical thinking.

"We want you to learn how to evaluate evidence," said Nye, host of the 1990s television hit "Bill Nye the Science Guy" and star of the new Netflix series "Bill Nye Saves the World," which debuts today (April 21).

Critical thinking is a crucial everyday skill, he said. Case in point: During a preview of his show here at the Paley Center for Media on April 18, Nye showed a sold-out crowd an "acid test" that he did with Steve Aoki, an electro house musician and 2017 Grammy nominee. ['Bill Nye Saves the World' Trailer | Video]

Their goal? To see whether an expensive product from Whole Foods promising to treat heartburn worked as well as milk of magnesia, a well-known antacid that can neutralize excess acid in the stomach. Their results? After testing the acidity of each after adding it to an acidic solution, milk of magnesia worked, while the pricy product flopped.

"This hippy stomach treatment, it has extract of elm, peppermint and vinegar," Nye said on the show. "Yeah, that's right — vinegar: acetic acid. You ever had sweet and sour anything? The sour is the vinegar. So, they want you to put vinegar in your stomach when it's upset? People, no!"

Just like in his "Science Guy" show, Nye performs a number of experiments as he "saves the world" in the new series. But unlike the '90s show, the new one includes special correspondents who travel to places such as Amsterdam and San Francisco to investigate artificial intelligence and alternative medicine, respectively. The series also has a cadre of performers, comedians and experts who weigh in on scientific issues.

With each segment, Nye encourages his audience to think critically, he said.

Science may be the pursuit of facts, but it's also a process, he said.

"Observe, design a test, test, see what happens, compare that to what you thought would happen and then what?" asked Nye, an engineer by training. "Start over."

The new, 13-episode season is rated TV-14, meaning that "anybody from middle school on up to centenarians" is welcome to watch as Nye and his team investigate a number of hot topics, he said. Those include the science behind climate change, genetically modified organisms (GMOs), vaccinations and video game addiction, Nye said. [Creative Genius: The World's Greatest Minds]

The show also promotes women in science, which dovetails with a nationwide push to promote women in STEM (science, technology, engineering and math) fields. Including female scientists and reporters in the show was a no-brainer for him, Nye said.

"My mother was really good at math and science," he said. "She was recruited by the [U.S.] Navy."

In its entirety, the show is for everyone, especially for people who watched Bill Nye as a kid, said Joanna Hausmann, a comedian and special correspondent for the show. "It's [about] the democratization of science," she added. "Hopefully, it makes people better thinkers and makes them laugh at the same time."

The show's message — promoting critical thinking — will hopefully resonate with viewers, especially voters who may start paying more attention to science at the national level, said Derek Muller, another special correspondent and host of the YouTube channel "Veritasium."

"When politicians are making decisions that go against what we know about science, it's a problem," Muller told reporters. "Scientists have a responsibility to stand and say, 'You know what, our work is based on evidence. You can't reject it just because you don't like it.'"