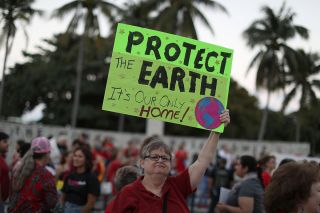 Are you ready to march for science?

On April 22, scientists and science advocates will gather in Washington, D.C., and in hundreds of other cities around the world to take part in the March for Science, a historic event that may well be the biggest march in history in support of science.

First proposed Jan. 22 in a conversation on Reddit, the March for Science quickly gathered more than 1 million followers on social media. Momentum was spurred by recent federal policy proposals to cut funding for scientific research and restrict the availability of data to the public. The march will also protest against the eradication of environmental protections and elimination of initiatives to mitigate climate change. [10 Historically Significant Political Protests]

Though the march takes place on Earth Day, environmental science won't be the only science getting its due. Anyone who practices or cares about any aspect of science is encouraged to march in its defense and support the cause, the organizers wrote in a statement.

Why are scientists speaking up?

President Donald Trump's administration has proposed unprecedented cuts to the sciences in its proposed 2018 budget. The largest proposed cut — a 31 percent reduction in the Environmental Protection Agency's budget — would cut programs including Energy Star (which helps consumers find energy-efficient products and buildings) and Targeted Air Shed Grants (which help limit pollution at the local level).

In 2009, Trump signed an open letter to President Barack Obama and Congress calling for aggressive action against climate change and greenhouse gas emissions, but he has since changed his stance. In a 2012 tweet, he called "The concept of global warming" a Chinese hoax, and on the campaign trail he threatened to pull the United States out of the Paris Agreement, a pact adopted by almost 200 countries to reduce carbon dioxide emissions.

Trump has also approved executive orders that roll back the Clean Power Plan, which would reduce carbon dioxide emissions from power plants, and approved construction for the Keystone XL pipeline, which the previous administration rejected because of concerns that it would contribute to climate change. [6 Politicians Who Got the Science Wrong]

Trump has also said that vaccines cause autism, which has been scientifically disproven countless times.

Three co-chairs joined the March for Science team on Jan. 24: Valorie V. Aquino, a researcher who explores the relationship between human communities and the environment; Caroline Weinberg, a health educator who has investigated genetic disease diagnosis and obesity prevention programs in public schools; and Jonathan Berman, a science educator and activist who researches the molecular origins of hypertension.

Currently, 170 organizations have joined as partners for the event, representing a broad range of scientific disciplines, according to the organization's website. They include the Entomological Society of America, the Society for Neuroscience, the Genetics Society of America, the Society for Research in Child Development, and the Center for Biological Diversity, to name just a few.

On March 30, the organizers announced the addition of three honorary co-chairs who will serve as ambassadors for the march and will speak at the event in Washington, D.C.

Serving in that capacity are Mona Hanna-Attisha, a pediatrician and public health advocate who exposed alarming instances of lead poisoning in children living in Flint, Michigan; biologist Lydia Villa-Komaroff, one of the first Mexican-American women awarded a doctorate in the natural sciences in the United States, and a contributor to research to derive insulin from bacteria; Bill Nye, a science educator and CEO of The Planetary Society, creator and host of the award-winning TV show "Bill Nye the Science Guy," and star of a new science-friendly series on Netflix, "Bill Nye Saves the World."

The March for Science in Washington, D.C., kicks off with a rally at 10 a.m. local time on the grounds surrounding the Washington Monument — between 15th Street and 17th Street, bounded to the north and south by Constitution Avenue and Independence Avenue. The march is scheduled to start at around 2 p.m. local time, with the route still to be announced, organizers said on the March for Science website.

During the rally, free audio descriptions for visually impaired attendees will be provided by Metropolitan Washington Ear, and sign language interpreters will translate all speeches delivered from the main stage. An accessible seating area will also be provided near the stage, the organizers explained in an accessibility plan provided online. A more detailed plan describing access points along the march route for people with disabilities will be available once the route is finalized, the march organizers added.

As of April 6, a total of 480 satellite marches are scheduled worldwide on every continent except Antarctica. There are 358 marches in the United States alone, spanning all 50 states, as well as the territories of Puerto Rico and Guam. Marches will take place as far north as Tromsø, Norway, and as far south as Dunedin, New Zealand, according to the March for Science interactive map.

People living in participating cities can connect with local organizers and fellow marchers through links provided in the map, and a registration form is available for those who do not yet have a march in their area and would like to organize one.

Tickets are not required to attend any of the marches, though participants are encouraged to register online, indicating where they will be marching to help organizers track attendance numbers.

Those who wish to participate but are unable to attend in person can still show their support by signing up for a virtual march, which will follow the march in Washington, D.C., as it is streamed live from the event's website.

On April 22, writers and editors from Live Science and our sister site Space.com will be covering the March for Science in Washington, D.C.; New York; Los Angeles; Honolulu; and San Francisco. Be sure to follow us on Facebook and Twitter for the latest updates!

In recent weeks, people have expressed concerns on social media about the march's commitment to diversity, inclusion and accessibility, organizers acknowledged in a statement. However, despite missteps in the past, those areas are now firmly integrated with the march's mission, they said.

"We cannot ignore issues of racism, sexism, homophobia, ableism, xenophobia, or any other form of discrimination in the discussion and implementation of science. Nor can we ignore the ways in which science has been misused to harm marginalized communities," the organizers said in the statement.

"The March for Science is an opportunity to advance important dialogues, both within the scientific community and with the public, on how we engage with policy and politics," they added. [The Year in Climate Change: 2016's Most Depressing Stories]

They also clarified that although the march is nonpartisan, it is certainly political.

"Politics and science are intertwined, whether we face a travel ban that restricts the free flow of scientific ideas, changes in education policy that diminish students' exposure to science, or budget cuts that restrict the availability of science for making policy decisions," the organizers said in the statement.

"We will work to become stronger partners with the communities we serve, and to ensure that policymakers understand and appreciate the vital services science provides."