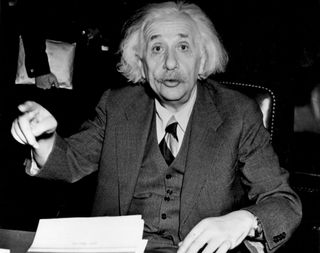 The letter was to an Arthur L. Converse, from Malcom, Iowa, and was sold by Nate D. Sanders Auctions. Bidding started at $15,000 on March 30, according to a statement from the auction house. A spokesman for the Sanders auctions, Sam Heller, said the letter had been in the Converse family's possession for many years. The auction house did not reveal the buyer's identity.

The letter — whose envelope indicated it was sent from ''Room 115'' of the Institute for Advanced Study in Princeton, New Jersey, on Sept. 7 — seems to answer questions about Einstein's theory of relativity and how to reconcile the theory with experiments. Converse was a science teacher and sent Einstein a questionnaire regarding experiments with electroscopes, which are charge-measuring instruments.

It isn't entirely clear what experiments Converse was referring to. But the letter does offer a little insight into Einstein's thinking and has some of his handwritten diagrams. [8 Ways You Can See Einstein's Theory of Relativity in Real Life]

Converse asked 10 questions, which Einstein answered. The famous physicist also wrote an opening page that says one should expect to measure a potential difference, a voltage, whose level depends on the distance from Earth's surface. Einstein wrote that the only assumption one needs to make is that there is some difference in the charge of the surface of the Earth and the upper atmosphere. Further, he said that the electroscope, in this case, would behave as though it were inside a charged sphere.

One question bears a question mark and a bit of mathematical notation from the famous physicist, who appeared to think the query was poorly phrased and defined.

In that response, Einstein said there is no problem with explaining an experimental result with "standard electrostatic theory." The letter doesn't include a description of what experiment Converse was asking about.

Einstein's theory of special relativity is related to electrostatics in that it unifies electricity and magnetism, seeing them as the same thing but viewed from different reference frames. A wire has no net charge, but when you hook it up to a battery and put it next to another wire, the two wires will repel or attract depending on the direction of the current in each one. In the same way, the theory indicates, a wire hooked up to a battery will attract another wire when the currents are going in the same direction, and repel when the currents are going in opposite directions.

This happens because of the unity of the electrostatic and magnetic forces. If you were an electron moving through a wire, from your point of view the negative charges in the other wire would not be moving at all if the current was in the same direction. Rather, the positive charges (the protons in the wire's atoms) would be zooming by.

In special relativity, there's a phenomenon called length contraction. Any movement in a given direction makes the lengths in that direction smaller to an observer at rest. So a rocket that is 330 feet (100 meters) long moving at some substantial fraction of the speed of light would, to a stationary observer, look as though it were squished in the direction of its motion — it would be shorter. (The passengers in the rocket would notice nothing unusual inside the rocket; but from their point of view, everyone outside looks shorter along the direction of movement).

Electrons don't move all that fast in wires – the typical speeds are on the order of a few micrometers per second – but there are a lot of electrons, so the effects become noticeable at human scales, and electromagnets work.

This matters because the unification of electricity and magnetism provided a theoretical basis for James Clerk Maxwell's discovery that electromagnetic waves move at the speed of light — they are light.

From Converse's questions, it seems he was doing some kind of thought experiment (or perhaps a real, physical experiment) involving measuring the potential — the voltage — using an electroscope. He seems to have asked whether it was necessary to have charge permeating the space between an electroscope and the Earth when measuring such potentials. It's not clear that he was asking about relativity per se. [The 18 Biggest Unsolved Mysteries in Physics]

In the 10 questions, readers get a clue as to what Converse was asking at Numbers 5 and 6: "Would your explanation hold true for an Earth without an atmosphere if the surface of such Earth had a negative charge of considerable density?" (Einstein said yes), and "Would the potential at height h be a so-called 'space charge,' or would we have to call it some other name such as 'true space charge?'"

Einstein answered that there's no need for a charge to be in the space outside the Earth in order for a potential difference (or voltage) to exist between a point on the surface and one above.

In Question 7, Converse asked if his experiment would get the same result if the Earth had no atmosphere, and in Number 8, he asked what the density of Earth's surface charge would have to be to balance any portion of the atmosphere, "condenser fashion." Here, Einstein wrote a question mark and what appears to be the equation for the total charge of a sphere in terms of charge density.

The last question described an experiment with an electroscope, and Einstein glossed over it with the note saying, "not clear." Einstein then crossed out the typed part, which said the charge on the electroscope increases with h (height).