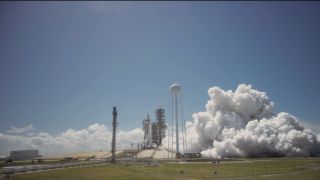 CAPE CANAVERAL, Fla. — At first glance, the Falcon 9 rocket being prepared for launch this week from NASA's Kennedy Space Center in Florida looks pretty much like the rest of the boosters in SpaceX’s growing fleet.

On closer scrutiny, however, the pristine white upper stage doesn’t quite match the rocket’s lower section. That’s because the rocket’s first stage has flown before. It now stands on the launch pad, still in its original paint, for a second mission to put a spacecraft into orbit.

NASA recovered and reused the space shuttles’ booster rockets, but the flights essentially entailed a rebuild. SpaceX is aiming for more airline-like operations, a point the company hopes to make on Thursday (March 30) when it launches its first previously flown booster on a mission to deliver a hefty communications satellite into orbit for SES of Luxembourg. [Reusable Rocket Launch Systems: How They Work (Infographic)]

"Flying the first pre-flown booster is going to be an extremely important step for us and for the industry," Martin Halliwell, SES chief technical officer, said in an interview with Space.com. "We saw this as an opportunity to push things forward."

SES prides itself on breaking barriers. The satellite operator was SpaceX’s first customer for a Falcon 9 ride to geostationary transfer orbit some 22,200 miles (35,730 kilometers) above Earth. It also was the first to fly on Russia’s Proton rocket.

"What this really brings is more flexibility in getting into space," he said. "To have more launch opportunities from SpaceX is really important to us."

SpaceX has a backlog of more than 70 missions, worth more than $10 billion. The company, founded and operated by technology entrepreneur Elon Musk, is working to pick up its launch rate following a Sept. 1 launch pad accident at Florida's Cape Canaveral Air Force Station that grounded its fleet for more than four months.

The company is aiming to fly about every two to three weeks, a pace that will be easier to maintain if it can refly its rockets and once repairs to the damaged launch pad are finished later this year. In the meantime, SpaceX is flying from Kennedy Space Center's historic Launch Pad 39A, which the company leased from NASA in 2014, and from Vandenberg Air Force Base in California.

SES has three more launches pending with SpaceX, two of which could fly on used boosters. Halliwell said pricing has not yet been determined.  "We’d like it to be as cheap as possible, but realistically where it can get to I don’t know," he said.

SES was not charged anything extra by its insurance company to fly the SES-10 satellite on a used Falcon 9, Halliwell added.  "It didn’t affect our rates in any material way whatsoever."

The Falcon 9 flying this week is one of up to six previously flown rockets in SpaceX’s fleet. The company has successfully landed boosters eight times, but one cannot be reflown — SpaceX declined to say why  — and another is on display outside the company’s headquarters in Hawthorne, California.

SpaceX will attempt to land the rocket flying Thursday on a platform in the ocean and has not ruled out a possible third flight, said company spokesman John Taylor.

"I have a vested interest in not only the success of the mission, but that they can land this vehicle as well," Halliwell said. SpaceX president Gwynne Shotwell "has promised me some parts off it for our lobby."