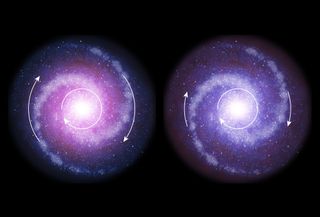 Scientists using the European Southern Observatory's Very Large Telescope in Chile have found signs that early galaxies had lower concentrations of dark matter than the younger galaxies seen today. In this schematic, the dark matter of a galaxy is shown in red (left), with the outer edges rotating slower due to lower concentrations.
(Image: © L. Calçada/ESO)

Although the invisible substance known as dark matter dominates galaxies nowadays, it was apparently only a minor ingredient of galaxies in the early universe, a new study finds.

This new finding sheds light on how galaxies and their mysterious "haloes" of dark matter have changed over time, researchers said.

Dark matter is thought to make up about 84 percent of the matter in the universe. Although dark matter is invisible, its presence can be inferred by its gravitational effects on visible matter. For instance, previous work discovered that the outer parts of galactic disks whirl faster than expected around the cores of those galaxies. These findings make sense if one assumes that "haloes" of dark matter envelop those galaxies and gravitationally pull at their outer regions. [The Search for Dark Matter in Pictures]

Now, the researchers unexpectedly find that in the early universe, dark matter played a much smaller role in galaxies than previously thought. The scientists detailed their findings in the March 16 issue of the journal Nature.

Using the European Southern Observatory's Very Large Telescope in Chile, the researchers examined six massive, star-forming galaxies from the early universe during the peak of galaxy formation 10 billion years ago. They analyzed the rotation of these galaxies to calculate how much dark matter they possessed.

When it comes to the Milky Way and other typical galaxies born in the current era of the universe, their "effective radius" — that is, the bright region that half their light comes from — is 50 to 80 percent dark matter, said study lead author Reinhard Genzel, an astrophysicist and director of the Max Planck Institute for Extraterrestrial Physics in Garching, Germany.

In comparison, in half the early galaxies the researchers studied, dark matter made up 10 percent or less of the galaxies' effective radius, Genzel said.

The researchers also looked at about 100 other, fainter galaxies. They discovered that, on average, data from these galaxies agreed with their findings. [Poll: Will Scientists Ever Understand Dark Matter?]

The researchers noted that early galaxies had continuous inflows of matter from intergalactic pockets of gas and dust. This could help explain why they were dominated more by normal matter than dark matter. In contrast, present-day galaxies have lots of hot gas around them that largely prevents them from gathering intergalactic material, Genzel said.

In addition, the dark matter haloes of early galaxies may have been much larger and more spread out than those of present-day galaxies. Over time, these haloes condensed and begun having stronger effects on galactic disks, the researchers said.

In the future, the researches want to look at smaller galaxies in the early universe, "which are the progenitors of local spiral galaxies like the Milky Way, to get a better picture of the broader population of galaxies and their evolution," Genzel said.