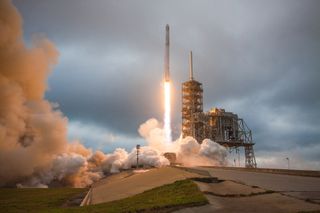 A SpaceX Falcon 9 rocket launches the company's Dragon cargo capsule toward the International Space Station from Launch Complex 39A at NASA's Kennedy Space Center in Florida on Feb. 19, 2017.
(Image: © SpaceX)

This story was updated at 2 a.m. EST Tuesday (March 14) after SpaceX scrubbed that day's launch attempt due to bad weather.

SpaceX may launch a commercial communications satellite in the wee hours of Thursday morning (March 16), and, if it does, you can watch the liftoff live.

A SpaceX Falcon 9 rocket carrying the EchoStar 23 satellite  was scheduled to lift off from NASA's Kennedy Space Center (KSC) in Florida Tuesday at 1:34 a.m. EDT (0534 GMT), but high winds scrubbed that attempt. The next opportunity will come at 1:35 a.m. EST (0535 GMT) on Thursday (March 16), SpaceX representatives have said. If the company does indeed launch on that day, you can watch the spaceflight action live at http://www.spacex.com/webcast.

You can also view the launch here at Space.com, courtesy of SpaceX. [In Photos: SpaceX's 1st Launch from NASA's Historic Pad 39A]

Unlike most of SpaceX's recent launches, the EchoStar 23 mission will not feature a landing attempt by the Falcon 9's first stage. That's because the rocket won't have enough fuel to come back down safely; EchoStar 23 is quite heavy and is going high up, to geostationary-transfer orbit, SpaceX founder and CEO Elon Musk has said.

SpaceX has successfully landed eight Falcon 9 first stages to date, with the first such success coming in December 2015.

The EchoStar 23 launch will be SpaceX's second from KSC's historic Launch Complex 39A, which hosted most Apollo moon-mission launches and space shuttle liftoffs. SpaceX signed a 20-year lease to use Pad 39A in 2014 and first launched a Falcon 9 from the site last month. That rocket sent SpaceX's robotic Dragon cargo capsule toward the International Space Station on a resupply run for NASA.

The EchoStar 23 mission has been pushed back several times; SpaceX originally planned to launch the satellite last year.