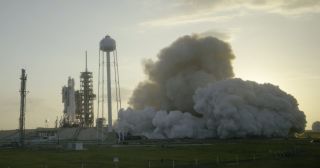 SpaceX test fires the first stage engines of a Falcon 9 rocket on Launch Pad 39A at NASA's Kennedy Space Center in Cape Canaveral, Florida on March 9, 2017. The Falcon 9 rocket will launch the EchoStar 23 communications satellite into orbit on March 14, according to SpaceX.
(Image: © SpaceX)

SpaceX conducted the Falcon 9 static test fire at Launch Pad 39A of NASA's Kennedy Space Center in Cape Canaveral, Florida to ensure that the rocket is ready to launch the communications satellite EchoStar 23 on Tuesday (March 14). The test, which was captured on video by SpaceflightNow, is a standard preflight check ahead of every SpaceX launch.

The Falcon 9 rocket is scheduled to launch EchoStar 23 Tuesday during a nearly three-hour window that opens at 1:34 a.m. EST (0634 GMT) and closes at 4:04 a.m. EST (0904 GMT). It will mark SpaceX's third launch of the year and its second from Pad 39A, which the company is leasing from NASA for commercial flights of Falcon 9 and Falcon Heavy rockets. NASA used the historic pad to launch Apollo moon missions and space shuttle flights. [In Photos: SpaceX's 1st Launch from NASA's Historic Pad 39A]

SpaceX CEO and founder Elon Musk has said on Twitter that the EchoStar 23 launch won't include an attempt to land the Falcon 9 booster due to the weight of the satellite and the altitude of its final geostationary transfer orbit. SpaceX has landed Falcon 9 rocket stages during eight of its most recent missions, including the Feb. 19 launch of a Dragon spacecraft carrying NASA cargo to the International Space Station.

SpaceX had hoped to launch EchoStar 23 last year, but the flight was delayed and target launch dates in January and February were also pushed back.

The satellite's launch site at Pad 39A is located just north of SpaceX's other Florida pad at the Cape Canaveral Air Force Station. That other pad, Space Launch Complex 40, was severely damaged in a Sept. 1 explosion during a SpaceX rocket test. SpaceX plans to repair the pad in order to resume Falcon 9 launches from the site.

SpaceX also has a West Coast launch site at the Vandenberg Air Force Base in California. The company's first launch of 2017 blasted off from that pad on Jan. 14.