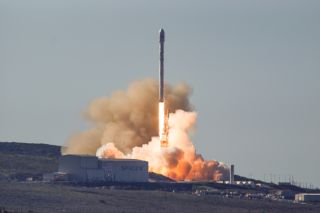 VANDENBERG AIR FORCE BASE, Calif. — SpaceX launched 10 satellites to orbit today (Jan. 14) in a rousing return-to-flight mission that also included a rocket landing on a ship at sea.

SpaceX's two-stage Falcon 9 rocket lifted off from a launch pad just a few hundred meters from the scenic California coastline here today at 12:54 p.m. EST (1754 GMT; 9:54 a.m. local California time), carrying 10 communications satellites to low-Earth orbit for the Virginia-based company Iridium. After a week of heavy rain and strong winds, only a few clouds obscured the view of the rocket as it climbed skyward.

This success was critically important to SpaceX, which is bouncing back from a Sept. 1 launch pad explosion that destroyed a Falcon 9 and its payload, the $200 million Amos-6 communications satellite. The company had been grounded until today, as it investigated the accident and worked to ensure that something similar doesn't happen again.

Not all of today's action was in the skyward direction. A few minutes after launch, the Falcon 9's first stage separated from the upper stage, then headed back down to Earth to attempt a touchdown on "Just Read the Instructions," one of SpaceX's two robotic "drone ships," which was stationed in the Pacific Ocean off the California coast.

The rocket stuck the landing eight minutes after lifting off. SpaceX has now pulled off seven such touchdowns during orbital launches, with five coming on drone ships and two rockets flying back to their launch sites on terra firma. (The previous six landings all occurred after launches from Florida's Cape Canaveral Air Force Station, between December 2015 and August 2016.)

These rocket touchdowns are part of SpaceX's effort to develop fully and rapidly reusable launch vehicles, a key priority for SpaceX's billionaire founder and CEO, Elon Musk. Such technology could cut the cost of launches dramatically, potentially enabling much greater access to space, Musk has said.

The first satellites in a new constellation

While the rocket landing was dramatic, the main goal today is to loft the 1,896-lb. (860 kilograms) satellites, which are the first 10 members of Iridium's planned 70-spacecraft "NEXT" constellation. The other 60 will also ride Falcon 9 rockets to orbit out of Vandenberg, on a series of six more launches.

NEXT will eventually replace Iridium's current communications network, which consists of 66 satellites in low-Earth orbit, company representatives have said.

"Iridium NEXT will dramatically enhance Iridium's ability to meet the growing demand for global mobile communications on land, at sea and in the skies," Iridium representatives wrote in an online description of NEXT, which they said will be the world's largest commercial satellite constellation when it's up and running.

The French satellite manufacturer Thales Alenia Space designed the NEXT spacecraft, though each one is assembled and tested at an Arizona facility operated by Virginia-based company Orbital ATK.

Not the first return to flight

SpaceX has rebounded from failure before. In June 2015, a Falcon 9 broke apart shortly after launching the company's robotic Dragon cargo capsule on a resupply mission to the International Space Station for NASA.

SpaceX investigators determined that a faulty steel strut in the Falcon 9's upper stage caused that accident. A Falcon 9 didn't fly again until December 2015, when an upgraded version of the rocket delivered 11 satellites to orbit for customer Orbcomm — and also made the first-ever soft landing during an orbital launch.

The Sept. 1, 2016 explosion, which occurred during a routine pre-launch test at Cape Canaveral, initially puzzled SpaceX; about a week later, Musk described the incident as the "most difficult and complex failure" in the company's history. But technicians and engineers eventually traced the cause to the failure of a high-pressure helium vessel inside the Falcon 9's second-stage liquid-oxygen tank.

SpaceX announced earlier this month that it had wrapped up its investigation of the Sept. 1 accident. The Federal Aviation Administration accepted the results of the inquiry and granted SpaceX a license that covers all seven launches required to orbit the 70 Iridium-NEXT satellites.

Today's liftoff was originally scheduled for Monday (Jan. 9) but slipped because of bad weather and issues with launch-site availability, according to tweets sent out by SpaceX.