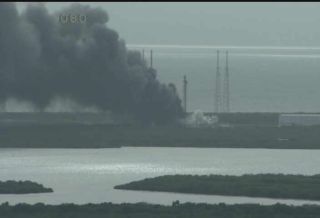 A SpaceX Falcon 9 rocket and its commercial satellite payload were destroyed by an explosion at their launchpad in Florida early Thursday (Sept. 1) during a typically routine test.

The explosion occurred at 9:07 a.m. EDT (1307 GMT), as SpaceX was preparing to launch the Amos-6 communications satellite for the Israeli company Spacecom from a pad at the Cape Canaveral Air Force Station on Saturday, Sept. 3. At the time, SpaceX was conducting a static-fire engine test on the Falcon 9. Such tests, which typically precede each SpaceX launch, involve firing the Falcon 9 rocket's first-stage engines while the booster remains secured to the launchpad.

"SpaceX can confirm that in preparation for today's static fire, there was an anomaly on the pad resulting in the loss of the vehicle and its payload," SpaceX representatives wrote in a statement. "Per standard procedure, the pad was clear, and there were no injuries." [SpaceX's Falcon 9 Rocket Explained]

UPDATE: USLaunchReport has released video of the explosion on its YouTube page:

The Amos-6 communications satellite reportedly cost $195 million and was built for Spacecom by Israel Aerospace Industries to serve as a replacement for Spacecom's Amos-2 satellite, which is expected end its mission this year. In October 2015, Facebook and the satellite communications company Eutelsat also announced a $95 million agreement to lease broadband capacity on the satellite from Spacecom, according to SpaceNews.

The Falcon 9 rocket is a two-stage booster designed to launch satellites and SpaceX's Dragon space capsules into orbit. The rocket stands 229 feet tall (70 meters) and uses rocket-grade kerosene and liquid oxygen for propellant.

SpaceX has had a long string of successful missions with the Falcon 9 rocket, with only one major failure. In June 2015, a Falcon 9 carrying a Dragon cargo ship for NASA exploded shortly after liftoff. SpaceX traced the problem to a faulty strut, and made upgrades before resuming commercial and NASA flights.

Editor's note: This story, originally posted at 9:38 a.m. EDT, was updated to include details from SpaceX's official statement on the explosion, which cited a pad anomaly, not the Falcon 9 rocket itself. It was also updated to correct the launch month of SpaceX's Falcon 9 failure to June 2015. An 11:46 a.m. EDT update pinned down the time of the pad explosion as announced by officials with the Cape Canaveral Air Force Station.