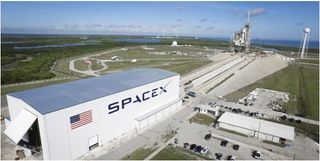 SpaceX on Sunday bumped this week's planned launch of an EchoStar communications satellite until after a mid-February cargo run to the International Space Station for NASA, saying it needs more time to get its new launch pad ready.

SpaceX, owned and operated by technology entrepreneur Elon Musk, is leasing the historic Launch Complex 39A from NASA to fly its Falcon 9 and planned Falcon Heavy rockets. The pad was last used by NASA's space shuttles in 2011 and previously by the Apollo program moon rockets.

Pad 39A is located at Kennedy Space Center in Florida, just north of what had been SpaceX's primary launch site at Cape Canaveral Air Force Station. The Cape Canaveral pad was heavily damaged on Sept 1 when a Falcon 9 rocket burst into flames during a routine preflight test.

After the accident the company decided to focus on getting 39A ready before it began rebuilding the damaged pad. It had hoped to launch the EchoStar 23 satellite last year, but delayed the flight to late January and then early February.

RELATED: SpaceX Must Still Prove That It Can Safely Launch Astronauts Into Space

On Sunday, SpaceX said it was slipping EchoStar's launch until after its mid-February cargo run to the International Space Station for NASA. Preliminary schedules show that launch targeted for Feb. 15.

"This schedule change allows time for additional testing of ground systems ahead of the CRS-10 mission," SpaceX said in a statement, referring to its 10th Commercial Resupply Services flight for NASA.

SpaceX did not immediately reply to request for comment about whether the company now would attempt to land the first stage of the Falcon 9 rocket so it can be re-used. Putting the EchoStar satellite into orbit would not leave the booster any propellant to fly back to the launch site or a floating landing pad in the ocean.

NASA is keeping the shuttle's second pad, 39B, for its planned heavy-lift Space Launch System rocket.