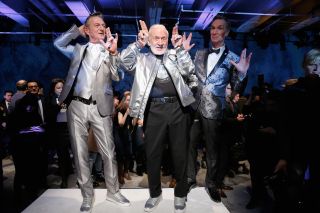 NEW YORK — Buzz Aldrin, the second person to walk on the moon, just took one giant leap for all astronaut-kind when he became the first astronaut to walk down the New York Fashion Week runway.

Aldrin strutted down the catwalk in a metallic bomber jacket and matching sneakers. Under the jacket, the astronaut wore something he designed himself: a black-and-white "Get Your Ass to Mars" T-shirt.

On Twitter, Aldrin wrote that walking the runway "was as easy as walking on the moon."

Nye rocked a space-themed tuxedo adorned in a retro rocket print. He completed the "science guy" look with a classy polka-dot bow tie.

Graham, a space enthusiast on the side, has consulted with Nye for science-themed fashion statements in the past. "Bill Nye Bow Ties" are sold on the designer's website.