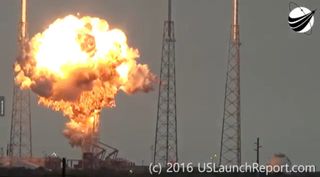 SpaceX's Falcon 9 rocket exploded during a routine prelaunch test on Sept. 1, 2016. A Falcon 9 should return to flight in early January 2017 if all goes according to plan, SpaceX representatives said.
(Image: © USLaunchReport.com video)

WASHINGTON — SpaceX plans to resume Falcon 9 launches on Jan. 8 after completing the investigation into the pad explosion that destroyed another Falcon 9 four months ago.

In a statement posted on the SpaceX website Jan. 2, the company said the explosion was caused by the failure of one of three helium tanks, known as composite overwrapped pressure vessels (COPVs), inside the liquid oxygen tank in the rocket’s second stage. The company had previously indicated that a COPV failure was a leading cause of the accident.

Each COPV is made of an aluminum liner surrounded by a carbon composite overwrap. Other COPVs recovered from the Falcon 9 showed buckling of their liners, although what caused the buckling isn't stated. [Dramatic Video of SpaceX's Rocket Explosion]

SpaceX said that the buckling, in and of itself, did not cause the tanks to fail. Instead, the company believes the buckles created voids between the liner and composite overwrap where liquid oxygen could pool. "When pressurized, oxygen pooled in this buckle can become trapped; in turn, breaking fibers or friction can ignite the oxygen in the overwrap, causing the COPV to fail," the company said. The temperature of the helium in the COPV is also cold enough to freeze some of the oxygen, exacerbating the problem.

In its statement, SpaceX said that investigators did not find a single, most likely cause of the failure, but all the potential causes were similar. "The investigation team identified several credible causes for the COPV failure, all of which involve accumulation of super chilled [liquid oxygen] or [solid oxygen] in buckles under the overwrap," the company stated.

SpaceX's return-to-flight plans call for changes in procedures for fueling the rocket rather than design changes to the COPVs. According to the company, it will use warmer helium in the COPVs and also change the process for loading helium into those tanks "to a prior flight proven configuration based on operations used in over 700 successful COPV loads."

The company didn't state what effect these changes would have on launch preparations or vehicle performance. The current version of the Falcon 9 uses so-called "super-cooled" propellants, where liquid oxygen is chilled to near the freezing point to increase its density and improve the vehicle’s performance. Those propellants are loaded into the Falcon 9 shortly before launch.

Those procedural changes are intended only to be short-term solutions. "In the long term, SpaceX will implement design changes to the COPVs to prevent buckles altogether, which will allow for faster loading operations," the company stated, but did not give a schedule for making those design changes.

The short-term fixes, though, should allow the Falcon 9 to resume launches that were put on hold after the Sept. 1 pad explosion. That includes the first of seven launches of Iridium Next satellites, which is now scheduled for no earlier than Jan. 8 from Vandenberg Air Force Base in California.

"Iridium is pleased with SpaceX’s announcement on the results of the Sept. 1 anomaly as identified by their accident investigation team, and their plans to target a return to flight on Jan. 8 with the first Iridium Next launch," Iridium said in a Jan. 2 statement.

That schedule is pending the issuance of a launch license from the U.S. Federal Aviation Administration. The FAA has not granted that license yet, but sources say the FAA has received and is reviewing SpaceX's report on the pad accident. In its statement, SpaceX noted that the FAA "provided oversight and coordination for the investigation" as part of the investigation team.

Should SpaceX successfully return to flight with the Iridium mission, its next launch is expected to be of the EchoStar-23 communications satellite later in January. That launch will be the first SpaceX mission from Launch Complex 39A at NASA's Kennedy Space Center in Florida, a former space shuttle pad that SpaceX is leasing primarily for Falcon 9 launches of its Crew Dragon spacecraft and launches of its Falcon Heavy rocket. SpaceX will be using the pad for other Falcon 9 launches because of damage sustained at Space Launch Complex 40 in the September pad explosion.