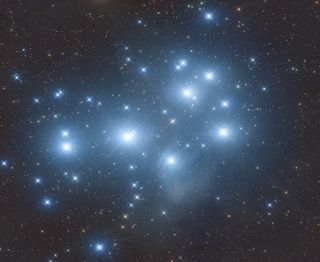 This image of M45, or the Pleiades star cluster, was taken by Ron Brecher in October 2016.
(Image: © Ron Brecher)

Twinkling stars shines in the stunning stargazing image. This image is of M45, also known as the Pleiades star cluster, or the Seven Sisters.

The image was taken by Ron Brecher in October 2016. The twinkling star field inspired Brecher.

"I did not know that there are hundreds of galaxies in the same field as the Pleiades star cluster," he wrote in an email to Space.com. "It is very easy to get lost in this rich star field."

The Pleiades is the dominant object in this shot, but the image has hundreds of other galaxies in the field. The Pleiades star cluster is a group of 800 stars, formed about 100 million years ago and located 410 light-years away from Earth in the constellation Taurus. A light-year is the distance light travels in one year, or about 6 trillion miles (10 trillion kilometers).

The blue haze around the stars are a reflection nebula where the light bounces off dust in the background. One of the brightest stars in the cluster is called Atlas. This star, along with its companion Pleione and their seven daughter stars, make up what we can typically see with the naked eye.

The brightest stars glow a hot blue and formed within the last 100 million years. This means they are extremely luminous and burn out quickly. Scientists estimate these stars will survive for more than 200 million years before they die out.