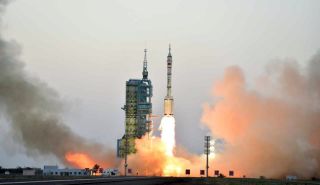 A Long March 2F spacecraft lifted off from the Jiuquan Satellite Launch Centre at 7:30 p.m. Eastern Oct. 16 (7:30 a.m. Beijing time Oct. 17) and placed the Shenzhou-11 spacecraft into orbit. The spacecraft separated from the rocket's upper stage and deployed its solar panels a little more than 10 minutes after liftoff.

"The rocket is flying according to its original plan, and the Shenzhou spacecraft has entered its preliminary orbit," said Gen. Zhang Youxia, chief commander of China's manned space program, in a statement less than a half-hour after launch. "I announce the launch of Shenzhou-11 manned spacecraft is a complete success." [China's Tiangong-2 Space Lab Mission in Pictures]

On board Shenzhou-11 are astronauts Jing Haipeng and Chen Dong, publicly announced as the crew less than 24 hours before the launch. Jing is a veteran astronaut, having flown on Shenzhou-7 in 2008 and Shenzhou-9 in 2012 . Chen is making his first spaceflight.

During the 30-day mission, Jing and Chen will carry out a number of medical and space science experiments, as well as test various systems on the Tiangong-2 module. They will also engage in public outreach activities, including serving as "special correspondents" for the state-run Xinhua news service.

The mission is part of Chinese efforts to develop a permanent space station. Chinese officials have indicated that they expect this station, consisting of several modules but smaller than the International Space Station, to be completed by the early 2020s.