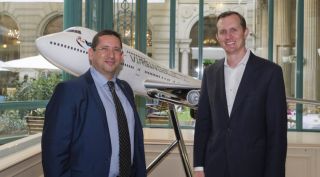 Meir Moalem, CEO and Founder of Sky and Space Global and George Whitesides, CEO of Virgin Galactic pose in front of a LauncherOne model at the World Satellite Business Week Conference in Paris.
(Image: © Virgin Galactic)

PARIS — Virgin Galactic announced a contract for four launches of satellites for a planned communications constellation.

The contract, with Australian company Sky and Space Global, covers launches of multiple satellites on each of four LauncherOne missions.

The launches will be the first LauncherOne missions to go into low-inclination orbits, with the rocket's carrier aircraft, a Boeing 747, taking off from an airport not disclosed in the announcement.

"Having a 747 as our flying launch site means that LauncherOne can tailor each mission to suit each customer," Virgin Galactic CEO George Whitesides said We've seen an enormous level of commercial and governmental interest in launches that can reach equatorial orbits without having to pay the large performance penalty associated with transfer orbits. We're very excited to have this agreement in place now with a great company like Sky and Space Global to deliver their satellites to orbit reliably, affordably, and flexibly."

"We are thrilled to partner with Virgin Galactic on our exciting missions and LauncherOne's first low inclination launches" Sky and Space Global CEO Meir Moalem said in a statement. "Just as we value purposeful innovation and customer service, Virgin Galactic shares our values and our vision for how communication can fundamentally improve lives. We have an ideal partner in Virgin Galactic's LauncherOne and its operational flexibility and are excited to work together to change the world for good."