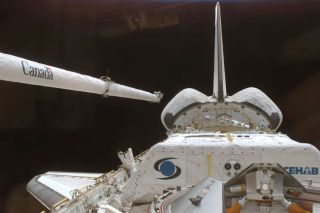 As seen through windows on the aft flight deck of Space Shuttle Discovery, the payload bay is featured in this image photographed by a STS-116 crewmember flight day two activities.
(Image: © NASA.)

HOUSTON -- Astronauts aboard NASA's space shuttle Discovery willtake a second look and their vehicle's heatshield today and deploy a pair of tiny satellites while preparing for theirreturnto Earth this week.

"We'll bespecifically looking at again the entire area of the wing leading edges and thenose cap for any micrometeoroid damage or debris damage that may have occurred,"Tony Ceccacci, NASA's lead shuttle flight director for Discovery's STS-116mission, said in a Tuesday mission status briefing.

"That riskis 1 in 300 every time we fly," Wayne Hale, NASA's shuttle program manager, hassaid of micrometeorites, adding that they are always a concern for spacecraft,satellites and any other vehicle in low Earth orbit.

NASA has called on its shuttle astronautsto perform late in section on the last twoorbiter flights, honing the activity in the process to mirror the FlightDay 2 surveys. Altogether, Ceccacci said, the inspection should take aboutfive hours.

Meanwhile, imageryanalysts are standing ready to pore through the images returned today, and expectto deliver a prognosis no later than 24 hours after the last bit of datareaches Earth, Ceccacci added.

"Theyreally have the hard job, in a way," STS-116mission specialist Nicholas Patrick, the prime robotic arm operator aboardDiscovery, said before launch of heat shield imagery analysts. "They're job'ssort of open ended, but ours is very well-defined. It will take most of theday, and then we hand the data down and say, 'Tell us what we saw.'"

Discovery'sSTS-116 crew is nearing the end of a 13-day mission to the International SpaceStation that successfully rewiredthe orbital laboratory's power system, added anew piece to its main truss and ferried a newcrewmember for its Expedition14 mission [image].The mission is set to end with a Dec. 22 landing at NASA's Kennedy Space Center at 3:56 p.m. EST (1856 GMT).

Followingtoday's heat shield survey, STS-116 mission specialists JoanHigginbotham and ChristerFuglesang are due to help deploy a pair of spring-loaded microsatellitesattached to a canister in the aft of Discovery's payload bay.

Known asMEPSI and RAFT, the small satellites are part of Discovery's Space TestProgram-H2 and are due to be deployed tonight.

Discovery'screw is due to deploy MEPSI at 7:06 p.m. EST (0006 Dec. 21 GMT), with RAFT --or Radar Fence Transponder -- to follow at 8:37 p.m. EST (0137 Dec. 21 GMT). TheRAFT satellite is an experimental payload built by students at the U.S. NavalAcademy aimed at testing space surveillance and communications protocols.

A thirdmicrosatellite mission, known as ANDE, is due to be deployed on Thursday. Allthree of the vehicles are stowed on Discovery's Integrated Cargo Carrier and sponsoredby the U.S. Department of Defense [image].

"Of courselate inspection is our number one priority," Ceccacci said. "So if that runslong, everything else gets taken off the plate."