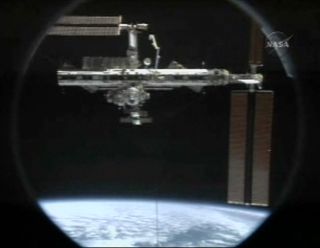 Discovery'sSTS-116 astronauts cast off from their ISS berth at 5:10 p.m. EST (2210 GMT), leavinga very different space station behind than the one they arrived at last week [image,video].

"ForAlpha, from the crew of Discovery, we wish you smooth sailing," STS-116commander Mark Polansky radioed to the ISS crew after undocking as both spacecraftflew over the eastern Pacific Ocean. "We hopeyou enjoy the new electrical system onboard station."

Polanskyand his STS-116 crewmates installed a newportside piece of the ISS, overhauledthe orbital laboratory's power grid and stayed an extra day for anunplanned fourthspacewalk to wrangle a wilysolar array into its storage boxes on Monday.

"It'salways a goal to try and leave someplace in a better shapethan it was when you came, and I think we've accomplished that," Polansky said before leaving the ISS. "I hope that we'rereally on our way to a great start for [ISS] assembly completion."

Discoveryis due to land at NASA's Kennedy Space Centeron Friday at 3:56 p.m. EST (1856 GMT). Discovery must land no later thanSaturday because of supply limitations.

"We bid abittersweet farewell to Discovery," Expedition 14 commander MichaelLopez-Alegria said during a brief ceremony. "And we'd like to welcome Sunito our crew."

One STS-116astronaut, first-time spaceflyer Sunita"Suni" Williams, is remaining behind onboard the ISS as a member of its Expedition14 crew. She is relieving European Space Agency (ESA) astronaut ThomasReiter, who has lived and worked aboard the station in his arrivalin July.

"I hopeDiscovery takes you home as smoothly and safely as it brought me here,"Williams told Reiter.

"By thepower vested in me, which I just invented, we would like to make you an honorarymember of NASA's astronaut corps," Lopez-Alegria said, dubbing the Germanspaceflyer a "model astronaut" and presenting him with makeshift NASA wings.

A veteranof two long-duration spaceflights, one to Russia'sMirand the other aboard ISS, Reiter's current mission returned the station tothree-astronaut operations for the first time since the 2003 Columbia accident.

"It's beenan exciting time, so it's hard to let go," Reiter said before leaving the spacestation. "I'm really excited to get back on the ground."

In additionto their ISS construction and crew exchange duties, Discovery's STS-116astronauts delivered about 5,215 pounds (2,365 kilograms) of spareparts, new equipment and fresh supplies for the space station's crew. Theorbiter left the outpost with about 3,725 pounds (1,689 kilograms) ofunneeded supplies, completed experiments and other hardware.

Beforelanding, Discovery's astronaut crew has a few more tasks ahead, including asecond heat shield survey and the launch of severalmicrosatellites from a palette at the rear of the orbiter's payload bay.

Known as a lateinspection, the heat shield survey is a mirror image of one performed onDec. 10 and includes scans of the orbiter's vital heat-resistant panels alongits wing leading edges and nose cap. Unlike the initiallook, which was aimed at identifying any damage caused by shuttle externaltank or ice during launch, late inspections target new impacts or dings from micrometeoritehits or orbital debris.

Discoverywill take up a position about 40 miles (64 kilometers) from the ISS until thelate inspection is complete, staying within range of the orbital laboratory -which can also serve as a shuttle safe haven - until the orbiter's heat shieldis once more cleared for landing, NASA officials said.

Discoverycarries three small technology-demonstrating satellites to be deployed in thenext two days. Two are due for deployment after the heat shield inspectionWednesday, with the third to fly on Thursday.