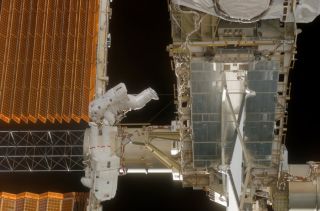 Discovery'sSTS-116 spacewalkers RobertCurbeam and ChristerFuglesang are due to start climbing the space station at 2:17 p.m. EST(1917 GMT) to reach the peak of its mast-likePort 6 (P6) truss which harbors the troublesome solar wing.

"I have apretty good feeling that we've got a good chance of success," Curbeam told the AssociatedPress TV Sunday in an interview broadcast on NASA TV.

WithCurbeam perched at the tip of the station's robotic arm and Fuglesang floatingfree, the duo plan to poke and prod a partially-furledsolar array until its two "blankets" are tucked neatly away in their storageboxes. NASA flight controllers hope the singular task will require little ornone of the strong-arm shaking performedin a Saturday spacewalk [image].

"We aregoing to try it with a little more finesse," said Tricia Mack, NASA's lead extravehicularactivity (EVA) officer for Discovery'sSTS-116 mission, in a status briefing Sunday.

Curbeamwill serve as a solar array surgeon of sorts, with Fuglesang handing him pliers,a scraper or a hooked tool--some rigged together and all wrapped in translucentorange Kapton tape--as needed to alternately poke on hinges or tug on guidewires to loose snares during the folding process [image].

Astronauts inside the ISS andDiscovery will issue the commands that remotely retract the 115-foot (35-meter)solar wing. Shuttle pilot WilliamOefelein will choreograph today's spacewalk while his crewmates JoanHigginbotham and SunitaWilliams wield the ISS robotic arm.

"We reallywant the entire array in the blanket box at the end of this EVA," Mack said,adding that a spaceworthy scraper tool wrapped in tape is expected to be thetool of choice to free the guide wires [image].

Today'sspacewalk, which is slated to run no longer than six and one half hours but maytake less than five, will be the fourth of Discovery's STS-116 spaceflight. Mission managers added it to the schedule late Saturday during a previous EVA in order tofold the P6 array without impacting later ISS or shuttle missions.

The beleagueredISS solar array extends over the station's port side and is one of two atop theP6 truss that must be retracted before the massive segment can be moved to itsfinal location next year.

Discoveryand ISS astronauts attemptedto furl the six-year-old array last week, but encountered folding problems whenguide wires jammed as they passed through grommets along some metal hinges ofthe 115-foot (35-meter) solar wing's individual panels [image].At just over half-folded, the array was stowed enough to allow a pair of newer solarwings on the port side the station to rotate and track the Sun.

"Right now,we're in a pretty good configuration and we're getting good power," Higginbothamtold television reporters Sunday, adding that the extra spacewalk added awelcome extra day in space for herself and her crewmates. "So if the solararray is not fully retracted, we're still good. But of course, we'd all like toget it fully retracted."

NASA mission managers were also concernedthat future maneuvers, such as spacecraft engine firings to boost the spacestation's orbit from vehicles at certain docking ports, could damage or evenbreak the solar array's mast in its half-furled configuration [image].

Curbeamwill make a bit of NASA history today as he sets a new space agency record forthe most spacewalks performed by a single astronaut during shuttle mission.

"Well, Ididn't know it was a record, but I feel great," Curbeam told televisionreporters Sunday. "I'll just have to treat it like any other spacewalk."

A veteranspaceflyer with six EVAs and three shuttle missions under his belt, Curbeam hasserved as the chief STS-116 spacewalker. He lead each of the three mission'sspacewalks to first installthe new Port 5 (P5) truss segment on the space station's port side, andthen rewirethe orbital laboratory's power grid and ultimately shakeits finicky P6 solar array.

Today'sspacewalk will also mark the third for Fuglesang, a European Space Agencyastronaut and Sweden's first spaceflyer, who is making his first spaceflightduring the STS-116 mission.

Mack saidthat before the solar array spacewalking tasks, the P6 truss extending abovethe ISS was the only region of the space station Curbeam was not slated tovisit. Over the course of three spacewalks, Curbeam ascended the ranks to movefrom 22nd to 13th on the list of most spacewalking time.

"He is justa machine," Mack said. "He is an EVA machine."