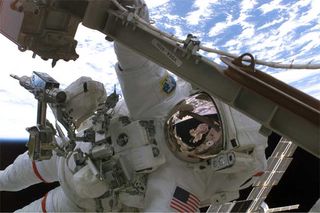 HOUSTON -- Two shuttle astronauts successfully rewiredpower systems for half of the International Space Station(ISS) Thursday in the first of two spacewalks to overhaulthe orbital laboratory's electrical grid this week.

Discovery'sSTS-116 spacewalkers RobertCurbeam and ChristerFuglesang reconfigured part of the space station's electrical system from atemporary set up to a permanent one now drawing power from two rotatingsolar arrays on the outpost's port side [video].

The astronauts wrangled stiff power andutility cables, disconnecting 19 of them while plugging 17 back in, to activatetwo primary power channels that feed ISS systems and a vital ammonia coolingsystem loop. The successful spacewalk, along with an upcoming Saturdayextravehicular activity (EVA), will set the stage for the station's expansionto support two new internationallaboratories and crews of six inupcoming years.

Curbeam andFuglesang sped through their spacewalk, the second of their STS-116mission to the ISS, to finish an hour earlier than the six hours allotted.They also began about 30 minutes early, stepping out of space station's Questairlock at 2:41 p.m. EST (1941 GMT).

Powerplay and other tasks

To allowspacewalkers to make major electrical changes outside the ISS, NASA flightcontrollers cut power to half of the space station. The move left half of thelights off in the U.S. segments along with a smoke detector and communications systems.

Live videowas unavailable throughout much of the spacewalk, since the astronauts were workingtoo close to the station's main Ku-band antenna relay, NASA officials said,adding that many non-critical systems were left without the backups.

Until today,the space station has relied on power generated by a pair of solar arrays onits mast-likePort 6 (P6) truss.

Curbeam andWilliams will stage one last planned spacewalk during the STS-116mission on Saturday to complete the rewiring job by performing similaractivations of the station's power channels 1 and 4.

In additionto speeding through their spacewalk, Curbeam and Fuglesang had some time for orbitalsightseeing, which apparently included shooting stars streaking through theEarth far below. The annual Geminid meteorshower, renownedas the world's best, peaked Wednesday night.

Fuglesang,a European Space Agency astronaut and Sweden'sfirst spaceflyer, sought out his homeland as the ISS passed over Europe. He and Curbeam also caught an eyeful of the aurora borealis, or northern lights.

NASA spokespersonBill Jeffs here at the Johnson Space Center said the astronauts were preparedto forgo any extra tasks during the last scheduled hour of today's spacewalk toavoid being caught outside should a fresh solar flare follow a similarevent earlier this week, but the astronauts were already inside by thatpoint. At no point were the astronauts in any danger, he added.

Mission controllers did have the joint ISSand Discovery crews sleepin protected areas earlier this week as a precaution when the flare firstappeared.

Today'sspacewalk marked the 75th in support of ISS assembly and maintenanceand the 47th staged from the space station itself. It also markedthe fifth career EVA for Curbeam, who now ranks 22nd on the list ofall time spacewalkers. Fuglesang now has two EVAs under his belt, a total of 11hours and 36 minutes, both which were performed during the currentSTS-116 mission.

NASA isstudying the possibility of a fourthSTS-116 spacewalk, that could call for Curbeam and Fuglesang to help fullyretract a P6 solar array left halfstowed on Wednesday after repeated attempts to fold it away completely frominside the ISS failed.