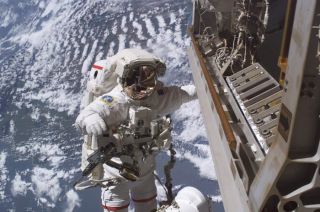 STS-116 astronaut Robert Curbeam prepares to replace a faulty TV camera on the exterior of the International Space Station on Dec. 12, 2006. during the first of three planned spacewalks of the NASA mission.
(Image: © NASA.)

HOUSTON--Two Discovery shuttle astronauts will ventureoutside the InternationalSpace Station (ISS) for their second spacewalk this week, this time torewire part of the orbital laboratory's power grid.

STS-116spacewalkers RobertCurbeam and ChristerFuglesang are expected to spend six hours overhauling half of the station'spower system from a temporary set up into its permanent configuration.

"[I]t isactually quite risky," Curbeam said of the spacewalk in a NASA interview. "But the biggest is riskis starting up the items that have never been operated on the station."

Today'sspacewalk will reconfigure the station's power channels 2 and 3, which shouldbe complete after the first 90 minutes, NASA's lead STS-116 spacewalk officerTricia Mack has said. A Saturday excursion by Curbeam and newly-arrived ISSflight engineer SunitaWilliams will reconfigure channels 1 and 4.

To do that,spacewalkers must disconnect and reconnect dozens of stiff cables to fold the Port 3/Port4 (P3/P4) solar arrays, which were installed at the ISS in September, intothe stations primary electrical system.

Thespacewalk will also activate two long dormant Main Bus Switching Units(Channels 2 and 3) that direct power where it's needed for the first time fouryears, and start up a vital pump module for the station's ammonia cooling systemthat will prevent the power systems from overheating.

If any onetask does not go as planned, the astronauts may have to stop their work andback out of their complicated procedures to replace faulty electronics boxes orperform other troubleshooting work, losing precious time, NASA officials havesaid.

Since 2000,the space station's main power has been provided by solar arrays on the mast-likePort 6 truss, which was always meant to be a temporary system untiladditional solar wings were installed and plugged into the outpost's maintruss. The P3/P4 solar arrays are the first to be plugged into the station'spermanent power system, which is vital for the outpost's expansion to accommodatelarger astronautcrews and additional internationallaboratory modules, NASA officials said.

One fear,Curbeam has said, is that he and Fuglesang will perform all their requiredtasks, unplug the station's power systems from P6 and into the main truss, onlyto find that nothing happens.

"We don'texpect everything to crumple on us like that," he said. "But you just don'tknow."

John Curry,NASA's lead ISS flight director for Discovery's STS-116 mission, said that halfof the space station's systems will shut down during today's spacewalk, dimmingthe lights for the eight astronauts inside and leaving many non-criticalsystems without redundant backups.

"A lot ofsystems go single string in the power down," Curry said.

Primarycontrol computers and life support systems will be safeguarded using a seriesof jumper cables, he added, but some ISS communications and ventilation systems,for example, will be affected. Astronauts will have to rely on Discovery'ssystems instead.

Curbeam andFuglesang will not be the only ones busy during today's spacewalk.

Once theISS power system overhaul is complete, Curbeam and Fuglesang still have work todo outside the space station.

Curbeam andFuglesang will also install two thermal covers over sensors on the spacestation's robotic arm and reconfigure an electrical patch panel that routespower to the orbital laboratory's Zenith 1 (Z1) and Russian segments.

"It's goingto be a pretty exciting day," Curbeam said.