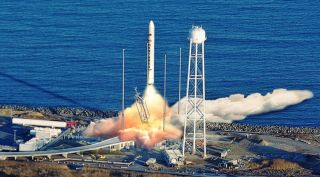 Orbital ATK said its redesigned Antares rocket, with different Russian first-stage propulsion, should make its first flight from Wallops Island, Virginia, in July. Synergies with other Orbital businesses mean Antares is profitable even if it wins no business beyond the 2-3 launches per year planned for NASA, Orbital said.
(Image: © NASA)

PARIS—Satellite and rocket builder Orbital ATK on May 5 said its re-engined Antares medium-lift launch vehicle likely would make its first flight in July and would be nicely profitable for Orbital even if it wins no other customers beyond its current NASA space station resupply business.

Dulles, Virginia-based Orbital has enough NASA station-resupply work to assure two or three Antares launches per year well into the next decade and the company expects to widen its customer set once the redesigned Antares has proven itself.

But even in a worst-case scenario in which Antares is used only for the NASA work, it will be a good business for Orbital.

"There are lots of interchangeable parts and subsystems, with the same engineering and manufacturing teams and facilities," Thompson said. If the vehicle can move beyond NASA to average five or six flights per year, the profit margin thickens, he said.

A flight rate of two or three per year is generally considered exceptionally low for a rocket that must pay its own way in a competitive environment. Orbital is one of three companies providing supply missions to NASA under the Commercial Resupply Services-2 contract, whose launches start in 2019.

The first re-engined Antares uses Russian RD-181 engines for the first stage. They replace an earlier Russian design that Orbital no longer trusted after an October 2014 Antares failure, which was the vehicle's fifth and last flight.

Assuming a successful static-fire test in late May at the Wallops Island, Virginia, spaceport, Antares would launch the Orbital-built Cygnus supply vehicle to the international space station in July. A successful launch will lead to a second flight around November, also a NASA station-resupply mission, Thompson said.

Orbital and the U.S. Air Force are investing in early research on a heavier-lift rocket that would use all U.S.-built engines and would be capable of serving both the U.S. government and the international commercial market.

Thompson said the joint investment would remain modest, with a decision in mid-2017 on whether to proceed with full-scale development of the rocket.

The overall commercial satellite market ebbs and flows, and demand for smaller satellites can be even more unpredictable.

Added to the market volatility is Orbital's special predicament with the still-non-functional U.S. Export-Import Bank, the U.S. export-credit agency. Orbital said Ex-Im's shutdown in 2015 cost it one of the three satellite orders it had believed it would win. The company ended the year with two satellite contracts.

For 2016, Thompson said, the overall commercial market is likely to no better than 2015, where only 17 commercial satellites — by Orbital's count — were ordered, including five smaller satellites in Orbital's range.

In 2016 as well there should be five smaller satellites coming up for bids. Thompson did not say whether any of these customers would require export-credit backing, but the fact is that Ex-Im, while operational, is awaiting U.S. Congressional approval of a new director that would permit the bank to support large-volume engagements such as satellite orders.