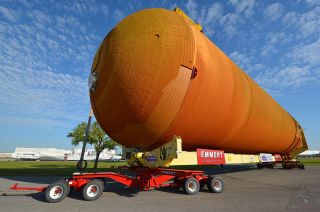 NASA's last flight-qualified external tank, ET-94, was moved at the Michoud Assembly Facility in New Orleans on Sunday, April 10, 2016, in preparation for its departure by ocean barge to Los Angeles and the California Science Center.
(Image: © collectSPACE.com)

NEW ORLEANS — A last-of-its-kind, very large artifact from NASA's space shuttle program is set to leave New Orleans this week on an almost 40-day ocean voyage to Los Angeles via the Panama Canal.

The remaining external tank built to fuel a space shuttle's launch into Earth orbit was rolled down a one-mile-long (1.6 km) road and onto a barge on Sunday (April 10), two days ahead of its scheduled departure from NASA's Michoud Assembly Facility in Louisiana.

"It is a bittersweet day, [but] at the same time we like to celebrate history of the work that was done by the men and women here," said Bobby Watkins, director of the Michoud Assembly Facility. "With it moving over to California, that is going to open it up for millions of people to come and take a look at it, so we're very proud of that." [Photo Gallery: Last Space Shuttle External Tank Loaded Onto Barge]

The 154-foot-long (47 m) orange-brown tank is destined for the California Science Center, where it will be mated with NASA's retired orbiter Endeavour and a pair of solid rocket boosters to create a unique vertical display of a fully-authentic space shuttle stack. The exhibit, to be erected in the Science Center's planned Samuel Oschin Air and Space Center, is slated to open to the public in 2019.

Endeavour was delivered to Los Angeles in 2012 atop a NASA-modified Boeing 747 jumbo jet and then was driven through the streets of Los Angeles to its display pavilion at the Science Center. An aircraft was not an option for the external tank, and so it is taking a circuitous route, crossing from the Atlantic to Pacific Ocean by way of the Panama Canal. Coming on shore at Marina del Rey, it will then spend a night traversing city streets to join the orbiter at the museum.

The tank is scheduled to arrive at the California Science Center on May 21.

The structural backbone of the space shuttle, the external tank was the vehicle's only major component that was discarded and destroyed with each launch. Over the course of the 135-mission space shuttle program, 136 flight-qualified external tanks were assembled at the Michoud facility. Just one of those tanks, no. 94 (ET-94), went unused and so it exists today to be shipped to Los Angeles.

ET-94, a "lightweight tank," was built at a time when NASA was transitioning to using even lighter "super lightweight tanks" to launch the heavier parts needed for the International Space Station. ET-94 may have launched a science mission were it not for the loss of the orbiter Columbia in 2003.

Instead, it became a test article, used to validate modifications made to the tanks that enabled the shuttle fleet to safely return to flight after Columbia. As part of that work, sections of insulating foam were removed, which can be seen on the tank in its current state.

Once at the Science Center, ET-94 will undergo a partial restoration, including the re-installation of feedlines and other hardware that were earlier removed by NASA. Foam repairs will also be applied to the tank's exterior.

First though, ET-94 has to leave for Los Angeles. A small ceremony, closed to the public, is scheduled for Tuesday afternoon, where Jody Singer, the deputy director of NASA's Marshall Space Flight Center, will sign over ownership of the tank to the California Science Center, represented by president Jeff Rudolph.