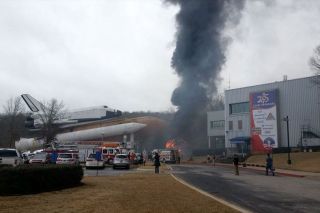 A fire broke out inside the former "Mission to Mars" ride at the U.S. Space & Rocket Center in Alabama on Dec. 26, 2015.
(Image: © Gerrit Burke via collectSPACE.com)

A fire broke out at the U.S. Space & Rocket Center in Huntsville, Alabama on Saturday (Dec. 26), damaging an out-of-use ride building that was formed from converted Saturn V rocket segments.

The fire inside the former Mission to Mars facility broke out sometime after 2 p.m. CST (2000 GMT) and was brought under control by the Huntsville Fire Department less than hour later. No injuries were reported.

"The fire was in a periphery older building, apart from any main building at the U.S. Space & Rocket Center," stated the museum in a notice posted on Facebook. "The building had not been in use in several years, and was scheduled for renovation." [NASA's Saturn V Moon Rocket Explained (Infographic)]

Photos and video posted by the museum's guests to social media showed flames and dark gray smoke rising from the small building, located behind the center's outdoor display of Pathfinder, a full-size space shuttle replica that includes twin solid rocket boosters and an external tank. The center is also home to U.S. Space Camp.

"Nothing else was impacted," the rocket center staff noted, "and guests were allowed to return to the museum shortly thereafter."

The damage to the former Mission to Mars facility affected mostly the long-closed ride and the vinyl roof covering part of the building, a center spokesman told collectSPACE. It's expected to take a few days for investigators to determine the cause of the fire.

The building is built from a few 1960s-era Apollo Saturn V interstages. Facing the building, the room on the left was originally built as the cylindrical structure that fit between the rocket's first (S-IC) and second (S-II) stages. The room on the right, shaped like a truncated cone, was originally built as the interstage between the Saturn V's second and third (S-IVB) stages.

Behind and attached to S-II is another interstage from a Saturn IB rocket.

The histories behind the interstages were not immediately available. The metal structures themselves did not appear to suffer damage, though a more thorough assessment is still needed, the center's spokesman said.

The U.S. Space & Rocket Center separately displays two Saturn V rockets: a replica that stands more than 360 feet tall (110 meters) in an outdoor rocket park and the original dynamic test vehicle, used by the nearby Marshall Space Flight Center to develop the moon-bound rocket, which is exhibited horizontally in the museum's Davidson Center for Space Exploration.

NASA launched 13 Saturn V rockets between the years of 1967 and 1973. Nine of the boosters flew astronauts to the moon. The last Saturn V rocket to leave Earth was used to put the United States' first space station, Skylab, in orbit.

Before housing Mission to Mars (not to be confused with the current ride located in the center's main building by the same name), the two converted Saturn V interstages were used for another attraction, called the "Shuttle Liner." The ride, which was open from the early 1980s through the late 1990s, simulated the experience of launching on the space shuttle while riding in its payload bay.

Saturday was the second time that a fire broke out at the U.S. Space & Rocket Center in four months. On Sept. 2, a fire began in a maintenance area after a heating appliance was accidentally left on near some combustible materials. That fire was quickly extinguished and did not impact the museum's operations.

See photos of the Saturn V interstages before the fire at the U.S. Space & Rocket Center at collectSPACE.com.