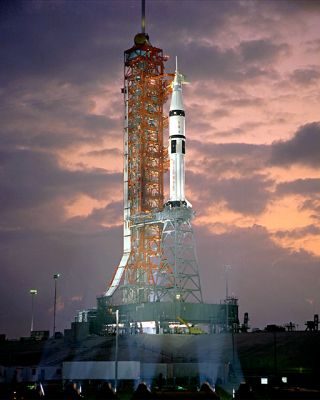 In this historical photo from the U.S. space agency, on July 2, 1975, dawn breaks behind the ASTP Saturn IB launch vehicle during the Countdown Demonstration Test. The Mobile Service Structure was moved away from the vehicle for the test, which is a step-by-step dress rehearsal for the launch culminating in a simulated T-zero and launch.

During the test, the stages of the Saturn IB rocket are fueled as they will be on launch day, July 15. Following the simulated liftoff, the fuels will be offloaded and the terminal portion of the count will be repeated tomorrow with the prime crewmen Thomas Stafford, Vance Brand and Donald Slayton aboard the spacecraft.