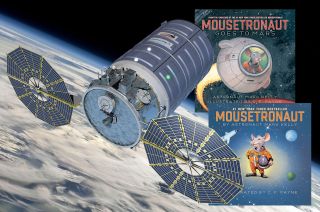 An astronaut's tales about a mouse that went to space are heading to the space station as part of Story Time From Space.
(Image: © Orbital ATK/NASA/Simon & Schuster/collectSPACE.com)

An astronaut's two children's books about a mouse who goes to space are now actually going to space, where the author's twin brother may take a turn reading them on video for kids on Earth.

"Mousetronaut" and "Mousetronaut Goes to Mars," written by former NASA astronaut Mark Kelly, are among a small bundle of space- and science-themed kid's books that are packed aboard Orbital ATK's Cygnus cargo ship scheduled to launch to the International Space Station today (Dec. 3). If all goes as planned, the spacecraft will arrive at the orbiting outpost three days later, where Kelly's brother, Scott, is currently the commander.

The books are part of "Story Time From Space," a project that offers educators with recordings of astronauts reading science-rich juvenile literature from orbit. The program was inaugurated on the space station in 2014 with the launch of five books authored by astronomer and teacher Jeffrey Bennett, including his series about a dog named Max who visits the moon, Mars and Jupiter. [Watch an Astronaut Read Kids a Story from Space]

Now seven more books are space-bound, including Kelly's two "Mousetronaut" titles. As it happens, Kelly's twin Scott is within his last 100 days of a nearly yearlong mission on the station, allowing for the possibility that he may read his sibling's stories before he comes home in March.

(The timing is at least partially coincidental, as the books were delayed after a couple of space station supply flights were lost in launch explosions. One of those accidents, an attempted SpaceX launch in June, also resulted in the loss of Story Time From Space's first science demonstrations, which the project is now working to rebuild.)

Also flying to the station is another astronaut-penned kid's book, "Endeavour's Long Journey," by former shuttle crew member John "Danny" Olivas. The book tells the history of the orbiter through the experience of a young boy seeing the shuttle on display at the California Science Center.

"It's a great opportunity to draw children into the program, getting them engaged in [science, technology, engineering and math] and what's going on on the International Space Station by doing an activity that they all love to do, which is being read story times," Olivas said. "And especially with 'Endeavour's Long Journey' going up, being able to bring to them a story of one of the space shuttles and make sure that remains relevant for a long time to come."

"Long Journey" has a connection to the Kellys, too: both Scott and Mark flew on Endeavour, the latter commanding STS-134, the orbiter's final mission, in 2011.

Other titles headed for the station include "I, Humanity," a new book authored by Bennett specifically for Story Time From Space; "Rosie Revere, Engineer" by Andrea Beatty, a New York Times bestselling book; and "The Rhino Who Swallowed a Storm" by LeVar Burton of Reading Rainbow and Star Trek fame.

Rounding out the Story Time From Space delivery is "The Incredible Intergalactic Journey Home," a title customized by its publisher, London-based Lost My Name books, to be based on where the recipient lives — from the country flag on the spaceship and the view of Earth from outer space, to pictures of key country, city and town locations. Seven-year-old Roraigh Curran of England won a contest to have the book being flown to the space station personalized for him.

The Story Time From Space books are among some 7,700 pounds (3,500 kg) of supplies and science being delivered by Orbital ATK's OA-4 mission to the station. The Cygnus, christened the Deke Slayton II in honor of the late Mercury astronaut, is launching atop a United Launch Alliance Atlas V from the Cape Canaveral Air Force Station in Florida.

To date, three videos of astronauts reading on the station have been posted to the Story Time From Space website for educators to use with their students. The project, which is organized by the Global Space Education Foundation, is supported by the Center for the Advancement of Science in Space (CASIS), which manages the International Space Station's U.S. National Laboratory.

Editor's Note: This article was updated to reflect that like his twin brother, Scott Kelly also flew on space shuttle Endeavour.