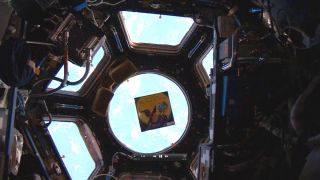 "The Wizard Who Saved the World" (Big Kid Science, 2011) by Jeffrey Bennett floating above Earth in the International Space Station's Cupola.
(Image: © NASA)

A few years ago, educator Patricia Tribe was cooking spaghetti and contemplating a tough question: How do you keep science in schools while still making enough time for literacy?

"He read 'Max Goes to the Moon'" (Big Kid Science, 2012), Tribe told Space.com. Bennett was happy to contribute to the project, but at first didn't believe the messenger, she joked. "He thought it was a prank call." [Space.com's Favorite Sci-Fi and Space Books]

Four years later, Tribe's "Story Time from Space" group is bigger; members include Drew, Bennett and former Canadian astronaut Bjarni Tryggvason. There are now five books from Bennett on the station, launched on an Orbital Sciences Corp. Antares flight in January 2014. Several astronauts have read the books on video in the past year. But Tribe's group now wants to add science experiments to the stories.

The group is asking for $55,000 on crowdfunding platform Indiegogo. They've raised a little more than $3,000 to date, and a Kickstarter campaign last year failed to achieve its goal. Tribe, however, says the group will keep seeking money through grants if this second campaign fails.

"We're not stopping, that's for sure," she said. The Indiegogo campaign concludes April 25.

The science experiments will deal with nine topics: balance, buoyancy, free fall, heat transfer, light, surface tension, orbit, pendulums and space's effects on the human body. Items for the experiments will include a spectrometer, a sensor to measure acceleration and discs with different colors to measure heat absorption through the station's huge cupola windows.

A typical experiment will be paired with material from one of the five books on the station, like using the spectrometer to watch the light changing during a sunset, for example. Data from the experiment will then be included in the lesson plan, which will be tailored according to student age (from primary school to university).

Despite the wide range of topics, the group's experiments fit in a box roughly 1 foot (30 centimeters) square that weighs only a couple of pounds (about 1 kilogram). They're expected to ride a SpaceX Dragon cargo spacecraft to station on June 13, Tribe said.

The major partner for "Story Time from Space" is the Center for the Advancement of Science in Space (CASIS), the sole operator for the United States science laboratory on the station, called Destiny. CASIS and NASA take care of the launch costs, while "Story Time", a nonprofit group, is responsible for paying for the payload creation, Tribe said.

The $55,000, or however much of that total goal is raised, will go toward funding the current range of experiments, currently paid for out of the group's pockets. As Tribe and other members get this package ready for a ride to orbit, they also plan to send several more books to the space station on the next Orbital Sciences flight, now scheduled for Nov. 19.

Other books on the shipment include yet another on astronomy from Bennett, "The Rhino Who Swallowed a Storm" (Reading Rainbow, 2014) from "Reading Rainbow's" Levar Burton (formerly of "Star Trek: TNG"), "Endeavour's Long Journey" (East West Discovery Press, 2013) by former astronaut John "Danny" Olivas and "Rosie Revere, Engineer" (Abrams Books for Young Readers, 2013) by Andrea Beaty.

Another book from Dr. Seuss Enterprises (but penned by another author) could launch in November or at a later time, Tribe added. The book is called "There's No Place in Space."

To support or learn more about the "Story Time from Space" project, visit: www.indiegogo.com/projects/science-stories-on-the-space-station