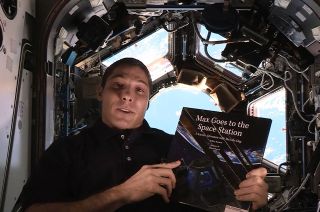 An astronaut on the International Space Station is floating before a bank of windows revealing the Earth below. He is holding open a children's book, pointing at a drawing of the orbiting outpost.

The scene marks the start of the first video produced as a part of "Story Time From Space," an educational outreach project that has the astronauts onboard the space station reading from a series of science-themed kid's books about a dog named Max and his experiences exploring the solar system. [Video: Story Time From Space]

"Story Time From Space is the perfect blend of education, perspective, and inspiration," said Jeffrey Bennett, the books' author and an astronomer. "When you're looking at it from above, looking down at the Earth, perspective comes really automatically, inspiration to think, 'People are really up there doing this; maybe I could be one of those people someday.' And now you have got the perfect platform to educate from."

Bennett's five "science adventure" books, including "Max Goes to the Space Station," "Max Goes to the Moon," and "Max Goes to Mars," were launched to the space stationin January. Since then, the astronauts have used some of their free time to film themselves reading the books while inside the outpost's observation deck, the Cupola.

"I absolutely love to read," Hopkins said in the Story Time From Space video. "I cannot think of a better location to read this story [than] with the Cupola behind us. That's our big observation window that looks down at the Earth."

In addition to NASA's Hopkins, Koichi Wakata with the Japan Aerospace Exploration Agency (JAXA) also took a turn reading the books. Their videos are now starting to be shared on StoryTimeFromSpace.com, where lessons and activity plans are also being added. (Hopkins returned to Earth in March, while Wakata's stay aboard the orbiting lab ended earlier this month.)

"Once you put it out there, once you put these videos on the web, they are accessible to everyone, anywhere in the world," Bennett said.

The books feature stories appropriate for young children accompanied by science-themed sidebars, called "Big Kid Boxes," that are intended to engage older students. Similarly, the Story Time From Space team is planning to build upon the books already in space by having the astronauts perform story-related experiments.

"We are also going to have astronauts up on the station doing science demonstrations," said Patricia Tribe, an educator who founded Story Time From Space with astronaut Alvin Drew.

Toward that end, the team has launched a crowdfunding campaign to support flying the science experiments to the space station.

"We're already in the planning stages to send the science demonstrations and more books to the International Space Station, tentatively looking at a launch in September, but that depends on you!" the team wrote on Kickstarter.com. "We need your support to succeed!"

Just over 10 percent of the $35,000 goal has been raised in the first two weeks of the two-month campaign. Fund-raising continues until July 7.

Donors can receive "Story Time From Space" bookmarks and t-shirts, as well as author-signed copies of the same books that are now on the space station. Supporters who back the project at the highest pledge levels can arrange for Bennett or even an astronaut to visit a school or special event of their choice.

Veteran Canadian astronaut Bjarni Tryggvason, who is a member of the Story Time From Space team, is helping to design the science demonstrations that will be flown to the space station.

Meanwhile, the books launched earlier this year remain on the space station and are continuing to be read on video, including in multiple languages.

"To the children around the world, the International Space Station is a real place orbiting high above our planet, built and operated by thousands of people from all around the world," read Hopkins as part of the project's first released video. "I hope that this story will not only teach you more about space and the International Space Station, but more importantly, that it will inspire you to join in a global effort to build a better future for all of us."

Click through to collectSPACE.com to watch the first video from Story Time From Space.