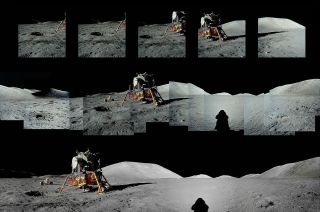 In "Apollo: The Panoramas," Mike Constantine presents his work digitally assembling stunning panoramas from individual photos taken by the Apollo astronauts on the moon.
(Image: © Moonpans via collectSPACE.com)

A new photo book about the Apollo moon landings provides a "wide look" at the lunar surface vistas that astronauts saw and captured on film more than 40 years ago.

"Apollo: The Panoramas," now being crowdfunded through Kickstarter, binds together more than 50 sprawling scenes digitally assembled from the thousands of photos taken by the moonwalkers between July 1969 and December 1972.

"'Apollo: The Panoramas,' as the title implies, is dedicated to high resolution assembly of the panoramic sequences that the astronauts captured on the lunar surface," Mike Constantine, the book's author, told collectSPACE.com. "Other books have included a small number of the panoramas as part of a collection of general Apollo images, but this book features over fifty seamless panoramas, each one over a full width, double page spread." [NASA's Historic Apollo 11 Moon Landing in Pictures]

Constantine, as the proprietor of the UK-based Moonpans, has been assembling the panoramas as digital files, large prints, wall murals and other formats for the past 15 years. His work today hangs in museums and has appeared in other publications, but this is the first time they have been presented in one book.

"While most of the photos taken [on the moon] were single shots, a large number were part of panoramic sequences, where we would stand in one spot, then turn through a 360 degree circle, taking 20 or so photos as we did so," said Apollo 16 lunar module pilot Charlie Duke. "And it is these panoramas that have been expertly assembled."

Duke, together with his fellow moonwalkers Alan Bean, Ed Mitchell and Harrison Schmitt, offered commentary for the book, which accompanies Constantine's own descriptions of each of the landscapes that detail the terrain, hardware and activity in each spread.

A traverse map for each mission is also included, showing the path the astronauts took around their landing sites and where each of the panoramas were captured.

"In this book, you get a good impression of how the terrain changes, from the almost flat Sea of Tranquility on Apollo 11 through to the [mountainous] Valley of Taurus Littrow on Apollo 17," Duke wrote.

Launched as a Kickstarter project on Sept. 9, "Apollo: The Panoramas" was promptly funded. The campaign has now surpassed $35,000, almost five times the initial goal, with 10 days to go before it closes on Oct. 9.

In addition to offering the book for £44 ($67), backers can also receive author-signed copies, panoramic photo prints, astronaut autographs and flown to the moon memorabilia including a segment of a cue card used on Apollo 12 and a medallion minted in part from metal flown on Apollo 17.

Add-ons aside, Constantine says the greatest benefit may be the chance to immerse oneself in the astronauts' view.

"The panoramas were captured in order for the geologists to get the complete story of each location and to provide context for the [lunar] samples returned," he said. "[But] we humans see the world in a 'wide-screen' format."

"So when you look at a panorama of the moon's surface, you get a much better sense of 'being there' compared to the square, cropped shots. This was something the Apollo astronauts told me also, that seeing the panoramas in this book brought back vivid memories of their [moonwalks]," Constantine said.

"Mike has done a great job in turning what started out as dozens of separate photos into beautiful panoramas that, when compiled together in this book, will help carry on the legacy of Apollo for many generations to come," he wrote.

See sample pages from "Apollo: The Panoramas" by Mike Constantine at collectSPACE.