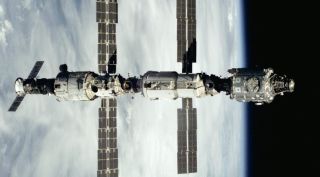 From left to right, Russia's Zvezda Service Module and Zarya FGB attached to the U.S. Unity module in 2000.
(Image: © NASA)

PARIS — Russia has formally notified its International Space Station partners that it will continue in the partnership at least to 2024, ending several months of doubts that were fueled by the current poor state of Russia's relations with the West.

The 22-nation European Space Agency confirmed that the Russia space agency, Roscosmos, had notified ESA and the other partners of its commitment to 2024, a decision that followed similar guarantees by NASA – the station's general contractor – and the Canadian Space Agency.

That leaves ESA and the Japanese space agency, JAXA, as the only two current partners yet to make a decision. ESA has yet to commit even to 2020 but expects to do so at a meeting of its member governments in late 2016. [Quiz: The International Space Station]

ESA's work on the service module for NASA's Orion crew-transport capsule is being done as a continuation of a barter arrangement with the U.S. space agency. Instead of paying NASA cash for its 8.3 percent share of the station's common resources, ESA has provided in-kind contributions, consisting up to now of cargo deliveries to the station using its Automated Transfer Vehicle (ATV).

The ATV was retired after five flights. While Orion is not intended as primarily a space station taxi, the two agencies agreed to allow ESA's work on the service module – which leverages ATV technology – to offset Europe's common station costs.

Like NASA and Russia, ESA and JAXA both have their own research laboratories attached to the space station.

It remains unclear when the station will need to be retired. Early assessments are that it could remain operational, without a sharp increase in maintenance charges, to 2028 and perhaps longer.