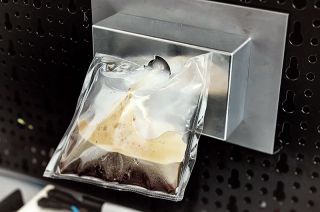 A prototype of Lavazza's and Argotec's "ISSpresso" dispenses a freshly-brewed Italian espresso just as the final coffee machine will do so onboard the International Space Station.
(Image: © Lavazza/Argotec)

The International Space Station is getting a critical upgrade: its first coffee machine.

The "ISSpresso," a capsule-based espresso machine, will enable astronauts to brew the hot caffeinated beverage as an alternative to the instant coffee that has been their only option aboard the space station for the past 13 years.

"We have been thinking about taking espresso into space for some time," said Giuseppe Lavazza, vice president of the coffee retailer Lavazza, in a statement. "Today we are in a position to overcome the limits of weightlessness and enjoy a good espresso – the indisputable symbol of made in Italy products – on board the International Space Station." [Video: ISSpresso by Argotec and Lavazza]

Lavazza and the Argotec aerospace company created the ISSpresso in collaboration with the Italian Space Agency (Agenzia Spaziale Italiana). Argotec has recently been the company responsible for developing the space food for the European astronauts who have flown to the station.

The ISSpresso's arrival on the station is timed to coincide with the launch this November of European Space Agency (ESA) astronaut Samantha Cristoforetti. Not only will she become the first Italian woman in space, but should all go as planned, she will also be the first to enjoy a real Italian espresso in orbit.

"How cool is that?" Cristoforetti wrote on Twitter. "I'll get to operate the first space espresso machine!"

The ISSpresso, which in addition to espresso can also be used brew caffè lungo and other hot beverages, including tea and broth, has been designed to meet the needs of the space environment. For example, the plastic tubing that is typically used to route water through terrestrial machines has been replaced with steel pipes that can withstand high pressurization.

The ISSpresso is intended to do more than just increase the variety of the astronauts' drinks and add to the study of fluid dynamics in microgravity, but also create a "corner cafè" to contribute to the crew's psychological well-being.

"A sort of social network in space," Lavazza said of the cafè concept. "[The ISSpresso will be] a venue for getting together, chatting and relaxing: an aspect that should not be ignored in missions that keep the astronauts away from home for many months in a challenging environment."

The ISSpresso's flight to the space station is possible due to the existing agreements between ASI and NASA.

"We are proud to contribute to the promotion of the image and spreading of the Made-in-Italy brand at international or better 'space,' level," said Roberto Battiston, the president of the Italian Space Agency.

The ISSpresso, while the first coffee machine, is not the first beverage dispenser to be developed for astronauts in space. In the mid-1990s, the Coca-Cola Company flew on two space shuttle flights fountains to dispense carbonated soft drinks. The results however, were not what Coca-Cola expected and the project was canceled.

The beverages currently flown to the station, including fruit drinks, tea and coffee, are dry powders packaged in Capri-Sun-like foil pouches. On orbit, the astronauts add water — recycled from the crew's urine and other waste water — to the drinks and then insert a clamped straw to avoid the liquid from floating out.

Click through to collectSPACE.com to see how the ISSpresso machine works in space.