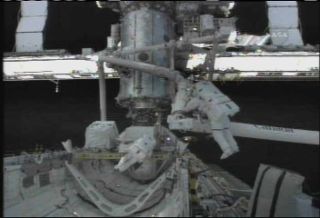 SpacewalkersPiersSellers and MichaelFossum, who spent more than seven hours workingoutside the ISS Saturday, will once again don their U.S.-built spacesuitsto restore the station's mobile crane to full operations. The spacewalk is setto begin at 8:13 a.m. EDT (1213 GMT).

The primarytask for Sellers and Fossum, both mission specialists for NASA's STS-121shuttle mission aboard Discovery, is to replace a reel-like power and datacable system that was severed late last year due to a still-unexplained glitch.

Known as a TrailingUmbilical System (TUS) Reel Assembly, the system transfers electricity,data and video to the space station's railcar-like Mobile Transporter. Thetransporter itself is a critical movable platform for shifting the ISS roboticarm or massive station components along the orbital laboratory's main truss.

"It'smobile now, but it's only dependable on one string," Sellers told reporters Sundayduring a space-to-ground video link. "And when we're done tomorrow, it willhave two strings and therefore be more reliable."

There aretwo reel assemblies that supply transfer power and video between the ISS andMobile Transporter. The ribbon-like cable to one, the TUS to be replaced today,was severed by an emergency cuttingsystem originally designed to fire its spring-loaded blade in the event theline snagged while the Mobile Transporter was in motion. The system inexplicablycut the trailing cable in December 2005.

An attemptto safeguard the surviving cable failed during a February 2006spacewalk by the space station's Expedition12 crew, though the two astronauts were able to remove the TUS lineentirely from the cutting system. The fix stranded the Mobile Transporter inplace until Saturday, when Sellers and Fossum installed ablade blocker that will prevent cutter tool from biting into its cabletarget even if it fires on its own, NASA said.

"Right now,it's dead on one side and just limping along on two wheels," Sellers said ofthe Mobile Transporter after Saturday's fix. "We need that thing to be working tomove big pieces around during the station's assembly."

NASA's nextshuttle mission - STS-115 aboard the Atlantis orbiter - is set to deliver amassive truss and new set of solar arrays to the ISS in just over one month,with launch currently set for Aug. 28.

"It's kindof important to get that done before the next lot of guys show up," Sellerssaid of the TUS repair.

TonyCeccacci, lead shuttle flight director for Discovery's STS-121 mission, saidtoday's spacewalk will be challenging because the space station has no stowageareas for the large, piano-sized TUS assemblies and Sellers will have to holdboth at the same time at one point in the repair.

Duringtheir Monday spacewalk, Sellers and Fossum will also install a spare pumpmodule, which is used to move the liquid ammonia used in the space station's coolingsystem.

Fossumadded that the TUS on board the ISS has also never been physically tested foruse in the shuttle payload bay fittings that will secure the hardware in placeduring Discovery's return flight home.

"We'regoing to be holding our breath a little bit," Fossum said Sunday. "But we feelgood about it, we've practiced it a lot."

Today'sspacewalk begins at 8:13 a.m. EDT (1213 GMT) and will be broadcast live on NASATV. You are invited to follow along with the STS-121 spacewalkers'activities using SPACE.com'sfeed of NASA TV by click here.