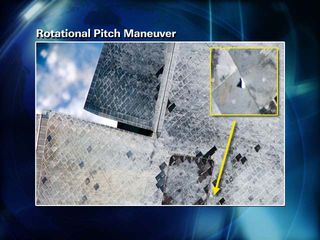 Analysts have identified a second gap filler protruding from the heat tiles along Discovery's belly after its STS-121 launch on July 4, 2006. The gap filler is located in the aft, near the body flap.
(Image: © NASA.)

"It's adone deal," said Tony Ceccacci, lead shuttle flightdirector for Discovery's STS-121 mission, adding that the decision will befinalized later today. "We're going to tell them we'll step up to do a 13-daymission and we'll plan accordingly."

A thirdspacewalk was originally in the mission plan for Discovery's STS-121 spaceflight,but was pulledoff the docket in May due to the flight's busy schedule. Sellers and Fossum continuedtraining for the extravehicular activity anyway, banking on the assumption- since proven - that the supply of cryogenic liquid hydrogen and liquid oxygenthat powers Discovery's fuel cells could last an extra day in orbit.

Ceccaccisaid the extra mission day also gives Discovery's crew some leeway in terms ofcargo transfer. The day could also be used to make heat shield repairs on theoff chance that today's focused inspections of Discovery turned up alast-minute issue, such as the need to pluck a pair of gap fillers from betweenthe spacecraft's belly-mounted tiles, he added.

"There aresome concerns and that's why we're doing the focused inspections," Ceccacci said.

NASA setaside four hours today for the STS-121 crew to examine six different concerns;a gapfiller jutting out near Discovery's starboard external tank door, a gapfiller - dubbed "tadpole" - along the forward section of the orbiter, a whitespot that appears similar to bird droppings on the nose cap, two scuffs on aright wing RCC panel and a dark spot on another RCC panel on the same wing.

Focusedinspections began about one hour late due to questions over the clearancerequirements when handling Discovery's orbital boom, which is a 50-foot(15-meter) extension of its 50-foot (15-meter) robotic arm, near the ISS, Ceccacci said.

Meanwhile,Sellers and Fossum are preparing for the firstspacewalk of their mission. The two spacewalkers are set to make repairs to acutting system used on the station's railcar-like Mobile Transporter and totest the stability of the orbital boom as a work platform.