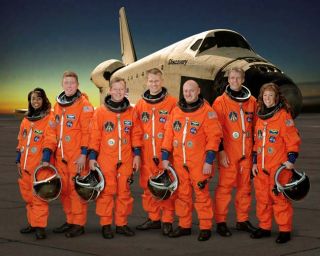 Asengineers prepare NASA's the space shuttle Discovery for a July launch, theorbiter's next astronaut crew is training hard for the upcoming spaceflight.

"It'samazing to see how dedicated everyone is," said Lisa Nowak, a missionspecialist for NASA's STS-121spaceflight, of the teams of workers preparing Discovery for flight. "Weknow that they've been working very hard and are giving is the safest shuttleand tank that they can."

Shuttleworkers at NASA's Kennedy Space Center (KSC) in Florida have attached Discoveryto the externalfuel tank and solid rocket boosters that will launch it into orbit. Theorbiter rolledinto NASA's cavernous Vehicle Assembly Building - where shuttle launchstacks are assembled - on May 12 and is due to roll out to the Pad 39B at 2:00a.m. EDT (0600 GMT) on May 19.

"It doesseem more real, and I can't identify why," Nowak told SPACE.com of the STS-121launch - which will mark the first spaceflight of her astronaut career - in arecent interview. "Maybe it's just because really everybody is more confidentthat everything is ready to go. You can feel that all around the [Johnson SpaceCenter] and I'm getting very excited."

The STS-121crew will deliver a cargo module full of supplies to the ISS, as well as stageat least two spacewalks to test shuttle flight safety and repair improvementsand conduct station maintenance. A third spacewalk, which NASA has pulledfrom the mission plan, could be performed pending available shuttle powerresources.

"We'restill training for all three spacewalks," STS-121 spacewalker Piers Sellers,who will make his second spaceflight during the mission, told SPACE.com."I will bet you a small sum of money, because that's all I have, that we willdo all three in fact."

During themission's first spacewalk, Sellers and STS-121 mission specialist MichaelFossum will test the stability of Discovery's orbital boom - a 50-foot(15-meter) extension that about doubles the length of orbiter's robotic arm -by perching themselves at its tip. The second excursion is a repair job of thespace station's railcar-likeMobile Transporter, with the final spacewalk slated to test shuttleheat shield repair techniques.

"We'rehoping to finish the business of showing that we can repair the shuttle to anextent, or to the best extent we can, and also fix all the things on stationthat have broken while we haven't been flying shuttles," Sellers said.

Engineershave also made a series of changes to the Discovery's external fuel tank toreduce the shedding of large pieces of foam insulation from the vessel atlaunch. Foam debris was seenduring Discovery's STS-114 mission, and a chunk of foam actually struck thespace shuttle Columbia's left wing leading edge during its 2003 launch, and hasbeen blamed for the loss of the orbiter and its crew during reentry.

Nowak saidshe and her fellow crewmembers have kept tabs on NASA's external tank work,with some traveling to KSC while the tank was attachedto its solid rocket boosters.

"We get thenews briefings and find out everything as it's going on, but we do more thanthat," Nowak said, adding that STS-121 astronauts also visited NASA's MichoudAssembly Facility to watch workers apply the foam insulation used toprevent ice from forming on the external tank's exterior when it is fueled withsuper-chilled liquid hydrogen and oxygen.

Nowak,Sellers and their STS-121 crewmates expect to spend about 13 days in orbit,including a week at the ISS, before returning to Earth during their mission.Despite the mission's extended delay, the STS-121 crew remains confident in aJuly launch.

"Definitelya bit more real, but you can never tell in this business," Sellers said of theupcoming launch date. "This time it looks like everything is going to get linedup for a July launch."