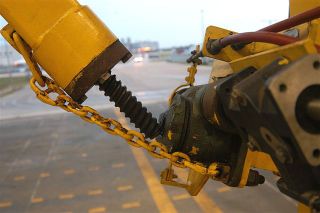 An up-close look at the sheared jack screw, part of a yellow sling that hoists NASA shuttles into the vertical position, that prevented a May 11 move of the Discovery orbiter into the Vehicle Assembly Building.
(Image: © NASA image via collectSPACE.com.)

Problemswith a sling designed to hoist Discovery into a vertical position inside themassive Vehicle Assembly Building (VAB) here prevented the shuttle's move fromits hangar-like Orbiter Processing Facility. A sheared screw on the sling willhave to be replaced and tested before NASA can press ahead with Discovery'smove.

Discoveryis now set to move to the VAB, where its external fuel tank and twin solidrocket boosters await its arrival atop their Mobile Launch Platform, at 8:00a.m. EDT (1200 GMT) Friday, NASA said.

Engineershope to mate Discovery to its external tank-booster stack over the next weekand roll the entire launch system out to Pad 39B here on May 19. The orbiter'srollover and rollout are key milestones for NASA, which hopes to launchDiscovery on its STS-121mission - the agency's second post-Columbia test flight - on July 1.

NASA KSCspokesperson Jessica Rye said a sheared jack screw on a spreader beam of thesling, which keeps the hoist's outer components clear of an orbiter while theyare attached, led to today's delay.

"We do havea spare," Ryesaid, adding that it would take about three hours to swap out the jack screw.

Butengineers also want to understand what caused the faulty jack screw to shearand ensure that its replacement is working properly before strapping the100-ton Discovery orbiter in the sling and lifting it off the VAB floor.

"They'vegot a metallurgist coming in to evaluate the issue," Buckingham said.

The threatof thunderstorms over NASA's Floridaspaceport would also have challenged a late afternoon rollover for Discoverytoday, he added.

NASA ispreparing Discovery to launch seven astronauts to the International SpaceStation (ISS) on the STS-121 test flight. The mission has a launch window thatstretches through July 19.

In additionto rollover operations, shuttle workers also moved the Italian-built Leonardomodule - one of four Multi-Purpose Logistic Modules - into a payload canisterThursday as part of NASA's STS-121 preparations. Packed with new equipment,experiments and other cargo, Leonardo will launch toward the ISS insideDiscovery's payload bay and carry vital supplies to the orbital laboratory'screw. Other cargo items, such as replacement ISS parts and spacewalk tools,have also been installed in the payload canister.

Buckinghamtold SPACE.com that current plans call for Leonardo to be delivered toPad 39B next week, possibly before Discovery rolls out from the VAB.

Discoverylaunched NASA's first return to flight mission, STS-114, to the ISS last Julyon  a 14-day mission that ended with a successfullanding at Edwards Air Force Base in California's Mojave Desert. Theshuttle returnedto KSC on Aug. 21 atop NASA's modified 747 carrier jet.