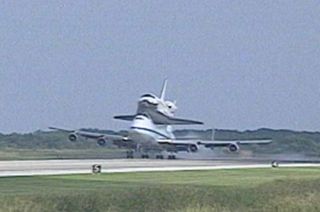 A modified Boeing 747 jumbo jetferried Discovery to KSC's Shuttle Landing Facilityat the orbiter's Cape Canaveral, Florida home, touching down at about 9:58 a.m.EDT (1358 GMT) after a 2.5-hour flight from Barksdale Air Force Base inLouisiana.

"This is a welcome sight for KennedySpace Center employees to see the vehicle back in town," NASA commentator BruceBuckingham said during the landing.

Discovery was slated to touchdown atKSC Saturdayafter a two-day flightfrom Edwards Air Force Base in California's Mojave Desert, but weather concernsprompted shuttle officials to postpone the trip, NASA officials said. NASAorbiters cannot fly through rain, which can damage the spacecraft, they added.

Discovery's Florida return is thelast leg of a 5.8-million-mile (9.3-million-kilometer) spaceflight that beganwith launch on July 26.After leaving Edwards Air Force Base on Friday, Discovery and its carrieraircraft stopped briefly at Altus Air Force Base in Oklahoma to refuel beforeheading to Barksdale. The cross-country move cost about $1 million, NASAofficials have said.

After a 14-day spaceflight to theInternational Space Station (ISS), where the shuttle's STS-114 astronaut crewdelivered vital supplies and tested new safety tools and procedures, Discoverylanded back on Earth on Aug. 9 at Edwards. Poor weather conditions preventedseveral landing opportunities at KSC.

"We weren't able to bring their ship back tothem," STS-114 mission specialist Stephen Robinson said just after returning toEarth, adding that he intended to be there when Discovery made it home.

Discovery's successful spaceflightmarked NASA's first shuttle mission since the 2003 loss of seven astronauts aboardthe Columbia obiter, which broke apart during reentry. A piece of foaminsulation fell from Columbia's external tank during launch and pierced its heatshield along its left wing, leaving it vulnerable to the extreme heat ofreentry, investigators found.

Discovery's flight was marred by a foamshedding problem similar to that which doomed Columbia and its STS-107astronaut crew, though the orbiter returned to Earth safely with a healthy heatshield. NASA officials vowed to solve the foam problem before launching anothershuttle mission, but are targetingMarch 2006 as the earliest an orbiter could fly.

Shuttle engineers are now workingwith a similar device at KSC's landing facility topry Discovery off its carrier plane. The shuttle will then be towed to itshangar, known as an Orbiter Processing Facility, where engineers will prepareit for NASA's next shuttle mission.

Discovery will fly NASA's secondreturn to flight mission, STS-121, now set to launch no earlier than March, 4,2006. The mission was previously set to fly aboard the Atlantis orbiter, whichis also set to fly the next major ISS construction flight. NASA officialsswitched STS-121 to Discovery last week to ease that schedule.