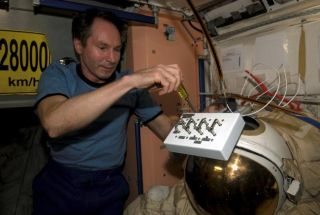 Twoastronauts living aboard the International Space Station (ISS) are preparing tofling an empty spacesuit into orbit next week during the second spacewalk oftheir six-month mission.

ISS Expedition12 commander Bill McArthur and flight engineer Valery Tokarev will stepoutside their orbital laboratory on Feb. 3 in a spacewalk that calls for -among other things - deploying a human-shaped satellite into a short-livedorbit.

McArthurand Tokarev will launch an unmanned, radio-equipped "SuitSat" spacesuit-the same Russian-built Orlan space attire they will don for the extravehicularactivity (EVA) - and perform a series of maintenance tasks during the plannedsix-hour spacewalk. [Click here formore on the SuitSat experiment.]

"The crewis in great spirits and is very eager to participate in this [spacewalk]," saidKwatsi Alibaruho, NASA's Expedition 12 EVA flight director, during a Fridaypress briefing at the agency's Johnson Space Center in Houston, Texas.

The coming EVAwill mark the fourth career spacewalk for McArthur and the second for Tokarev.

The SuitSattoss is, by far, the most eye-catching tasks planned for the upcomingspacewalk.

McArthurand Tokarev have primed the Orlan spacesuit with an antenna, radio transponderand other gear for its brief mission. Tokarev will toss the unpressurized garmentinto space in a retrograde direction -opposite of the space station's flightpath - where it will orbit for several days before burning up in the Earth's atmosphere.

SuitSatwill broadcast a repeating message in five languages, as well as an image andseveral "secret words" for listening students to decode on Earth, NASAofficials said, adding that the experiment is sponsored by a collection of internationalham radio operators.

Followingthe SuitSat deployment, the McArthur and Tokarev will move a hub cap-sized grapplingfixture used by the station's Russian Strela boom from its current location onthe Zarya control module to the Pressurized Mating Adapter-3 (PMA-3) dockingport, where NASA orbiters typically berth. The boom will be moved there laterfor a future spacewalk.

One vitaltask involves the space station's mobile transporter, a platform designed to traverseup and down the laboratory's main truss like a railcar.

"It'sessentially a guillotine," said Kirk Shireman, NASA's deputy ISS programmanager at JSC, of the cutter during the briefing. "It's really important thatwe fix this before we can use the mobile transporter."

The mobiletransporter, which serves as a base for the station's robotic arm and a sledfor major ISS components, cannot be used for either function until it has bothcable systems in operation.

McArthurand Tokarev will safeguard the working cable from inadvertently being cut byinstalling a special safing bolt. But a future spacewalk during the nextshuttle mission - NASA's STS-121flight set for May - will be needed to swap out the problematic IAU, ISSmanagers said.

To preparefor their spacewalk, the Expedition 12 crew has spent many hours going overdetails with flight controllers, cataloging tools, sifting through images andwatching video beamed up to the station from mission control.

"It's beensix months since their last water run training EVA and three months since theirlast spacewalk,which can have some effect on efficiency," said Anna Jarvis, the leadExpedition 12 EVA officer at NASA's Johnson Space Center in Houston, Texas, duringthe briefing. "But [ISS] increment crews have an advantage that they haveadapted themselves to moving in the weightless environment."

Theastronauts are also slated to conduct a photographic survey of the station'sRussian-built service module and retrieve a Russian Biorisk container designedto study the space environment's impact on microorganisms.

"By theconclusion of this EVA, Bill and Valery will have traversed to just about theextreme ends of every part of the station, which I know [they] are lookingforward to," Jarvis explained.

In additionto his spacewalk preparation and maintenance tasks, McArthur has thrived in hisrole as NASA's ISS Science Officer, Robinson said.

Theastronaut veteran has spent his personal time on Saturdays as a humancentrifuge, spinning in circles to try to eliminate bubbles from cell growthsample containers, she added.

McArthurhas also relayed more than 8,000 images down to flight controllers andperformed a series of studies to test capillary action, the behaviors ofmaterials that hover between liquids and gases, as well as the responses of hisown legs and feet - and their respective muscles - to the microgravityenvironment. He and Tokarev have also performed the second of three kidneystone studies of their mission.

By the timeof their second spacewalk, McArthur and Tokarev will have lived aboard the ISSfor four months since dockingat the station on Oct. 3, 2005. The two men are expected to return to Earth onApril 9 with Brazilian astronaut MarcosPontes, who will launch toward the space station with ISSExpedition 13 commander Pavel Vinogradov and flight engineer JeffreyWilliams on March 30.