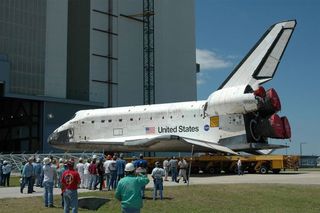 Discovery’s rollover to the VAB marks the start of the journey to the launch pad and, ultimately, launch. Once inside the VAB, Discovery will be raised to vertical and lifted up and over into high bay 3 for stacking with its redesigned external tank and twin solid rocket boosters.
(Image: © NASA/Jim Grossmann.)

Discoveryrolled into NASA's 52-story Vehicle Assembly Building (VAB) here at the agency's Kennedy Space Center at about 12:14 p.m. EDT (1612 GMT), where it will bereadied to fly the second shuttle flight since the 2003 Columbia accident.

"Of coursewe're very excited," said Stephanie Stilson, NASA's flow manager for theDiscovery orbiter, after the spacecraft reached the VAB. "We couldn't ask for anicer day today to be rolling over."

Discoveryis slated to launch six shuttle astronauts and one space station crewmember tothe International Space Station (ISS) in early July during NASA's STS-121mission. The space agency hopes to launchthe orbiter by July 1, but has until July 19 to make the space shot.

"It'sawesome that we're getting back to flight again," said Ken Revay, manager ofexternal tank and solid rocket booster operations for NASA contractor United SpaceAlliance, in an interview. "That's what the team is put together to go do, andwe have the best in the world."

But Discovery'sroad to the VAB has been long. The spacecraft returnedto KSC from California's Edwards Air Force Base - where it landedafter NASA's first post-Columbia missionSTS-114 - on Aug. 21, 2005, and spent months inside its hangar-like OrbiterProcessing Facility undergoing work for the next flight.

Engineersreplaced seven of the Discovery's 10 cockpit windows and changed out 5,104 ofthe 15,000 gap-fillers between the thousands of heat-resistant tiles that linethe orbiter's underbelly. The measure, NASA hopes, will prevent gap-fillersfrom jutting out during flight and adding a potential heat source duringreentry.

Shuttleworkers also had to repair the shuttle's robotic arm, which was damagedduring a stringof accidents that led KSC officials to call a work timeout to refocusefforts to ensure worker and hardware safety.

"Everyperson that works on this vehicle has accountability," Stilson said, addingthat the prolonged period between shuttle flights since the Columbia accidentmay have left some workers rusty. "Anytime we have anything doesn't go the waywe expect, we all feel it."

Stilsonsaid very little work remains for Discovery, which is on track to roll out toNASA's Pad 39B launch site in the early hours of May 19.

"The nextthing we're looking forward to is getting out to the pad," Stilson said.

The launchwill also test the orbiter's redesignedexternal tank, which has been strippedof a foam ramp to reduce the amount of potentially harmful debris during launchand ascent. Foam debris at launch pierced Columbia's heat shield, dooming theorbiter and its seven astronauts during reentry on Feb. 1, 2003.