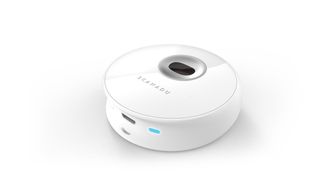 "Star Trek" fans may soon get a chance to have their own Dr. McCoy moment with the world's first real-life medical tricorder, which will be available to the public soon thanks to a crowdfunding campaign that raised more than $1 million for the Space Age technology.

On "Star Trek," Dr. Leonard "Bones" McCoy used a medical tricorder to scan patients and immediately diagnose their ailments. While the new real-life version, called the Scanadu Scout, is missing some of the features of its science fiction counterpart — namely the ability to make internal scans and complex diagnoses — it still can be a handy device for medical checkups on the go.

Within about 10 seconds of pressing the Scanadu Scout to your forehead with thumb and forefinger, the tool reads out your heart rate, temperature, oximetry (blood oxygen level), respiratory rate, blood pressure, stress and electrocardiography (ECG). [The Top 10 Star Trek Technologies ]

"It's the 21st-century version of the medical tricorder from 'Star Trek,'" said Scanadu founder and CEO Walter de Brouwer. "Basically it has a complete emergency room in there — when you go to the emergency room and they hook you up, the same readings you get out of [the Scout]. It's one more device out of 'Star Trek' that will see reality."

About a month ago, Scanadu started a crowdfunding campaign for the device on Indiegogo, hoping to raise $100,000. As of Monday (June 24), the company had raised more than $1.18 million.

Shortly before the campaign's one-month deadline, Scanadu decided to extend it for another month. The public now has until July 20 to order a first-generation Scanadu Scout for $199, before they are out in stores.

De Brouwer said his invention was inspired by "Star Trek," and hopes over time the Scout will become more like the futuristic tool of the television series.

"If you look at the tricorder in Star Trek, it has four ideals: It is non-contact, it is non-cooperative — you may even be unconscious — it is non-sampling (doesn't take a sample of blood) and it is non-invasive," de Brouwer told SPACE.com. "The technology, probably in 10 years from now, will be built into our environment, so preventive medicine will almost disappear into the walls, into the fabric of our reality."

Early adopters of the Scanadu Scout will get to try the device out as an exploratory tool. In order to market the product as a medical device to the consumer market, the company will have to seek approval from the FDA. Scanadu plans to use experiences and data collected by its first customers to improve and understand the product in preparation for that stage.

"It's great that you can have a customer who pays but is also a developer and thinks with you, and at the same time you make a planetary effort to make this device come out of a movie," de Brouwer said.