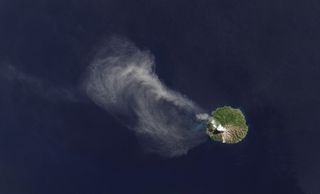 As the saying goes: Where there's smoke, there's fire. That's certainly the case for Indonesia's Paluweh volcano. When the Landsat Data Continuity Mission satellite flew over Paluweh on April 29, it captured images of the smoke from the eruption and an infrared picture of fiery, molten lava at the apex of the volcano. Lava has been spewing from the island in recent months, according to NASA.

The image shows off the satellite's ability to distinguish the contrast between hot and cold, capturing "the boundaries between the hot volcanic activity and the cooler volcanic ash without the signal from the hot spot bleeding over into pixels [showing] the cooler surrounding areas," NASA reported. Older instruments couldn't do this as well — just as the sight of a flashlight distorts the eyes' ability to see darkness, hot objects can distort instruments' ability to see cooler ones nearby. But that's not the case with this new instrument, which was designed to get past previous limitations.

"We can image the white, representing the very hot lava, and right next to it we image the gray and black from the cooler surrounding ash," said NASA researcher Betsy Forsbackain in the statement. "It's exciting that we're imaging such diverse thermal activity so well."

The satellite can detect shifts in temperature in the atmosphere or surface as small 0.18 degreesFahrenheit (0.1 degrees Celsius), meaning it should help give scientists a more accurate measure of Earth's temperature, according to NASA.

This story was provided by OurAmazingPlanet, a sister site to SPACE.com. Email Douglas Main or follow him @Douglas_Main. Follow us @OAPlanet, Facebook or Google+. Original article on LiveScience's OurAmazingPlanet.